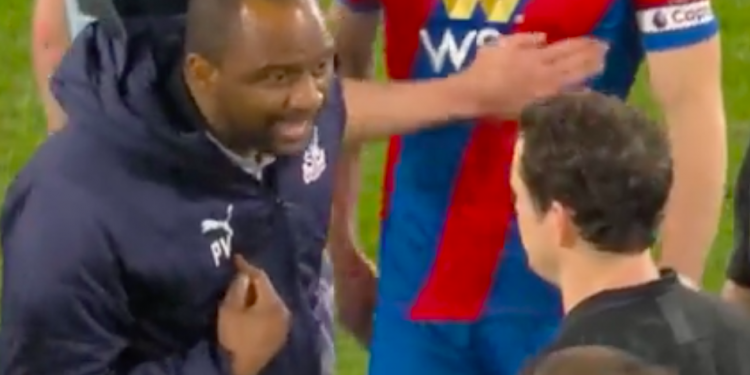 Patrick Vieira lost his cool with the referee after Crystal Palace lost 3-2 at home to West Ham.

The match at Selhurst Park was full of action as the Eagles nearly came back from 3-0 down to grab a point.

Vieira was furious with the referee after the matchSky Sports

Palace captain Ward had to push Vieira away

Vieira had words with the referee at both half-time and full-time, with the exchange after the final whistle getting heated.

The Frenchman took issue with something and received a yellow card for his words to Darren England.

Palace captain Joel Ward was forced to push Vieira away from the confrontation so he avoided further punishment.

Two goals in three first-half minutes helped the Hammers take control of the London derby with Michail Antonio and Manuel Lanzini getting on the scoresheet.

Vieira spoke to the referee at half-time and full-timeGetty

VAR was at the centre of the controversy at the end of the first half as Luka Milivojevic controlled the ball with his hand and West Ham were given a penalty, which Lanzini converted.

Palace mounted a spirited comeback in the second half, but it proved to not be enough.

But Vieira’s anger was not over the penalty decision and he even agreed with the referee.

When asked about his conversation with the referee at half-time Vieira said: “It was something between the referee and myself, there is nothing more to say about it.”

On the heated discussion after the final whistle, Vieira added: “Again, that is between the referee and myself. I got booked for it and I will accept that.”

How One Czech City Is Supporting its Migrant Population