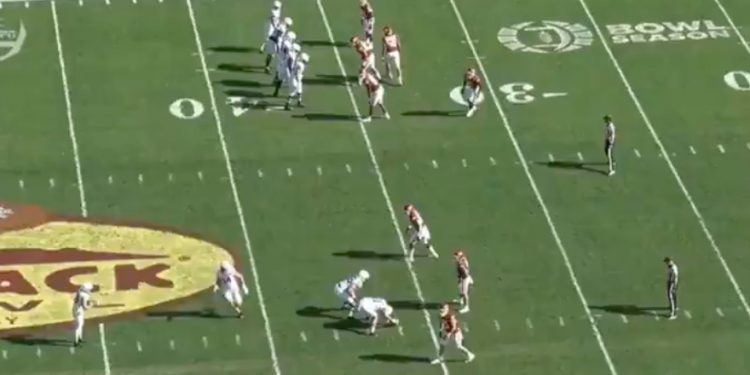 New Year’s Day is known for its load slate of college football bowl games. The first one to ring in 2022 was the Outback Bowl between Penn State and No. 21 Arkansas in a Big Ten vs. SEC battle. While the Nittany Lions took a 10-7 lead into the locker room, the moment from the first half of the game that got everyone talking involved their special teams unit doing something extremely silly.

Jordan Stout, the program’s all-conference punter who will very likely be booting the ball for an NFL team starting next year, looked like he was going to attempt a field goal. But after calling a timeout, Penn State’s coaching staff decided to dial up a fake on fourth-and-13 from the Arkansas 36. It is high on the list of the worst fake punts you will ever see, but if there’s any solace, it was also very funny.

The Lions came out in a very weird formation and, well, just watch what happens here I can’t do it justice.

It’s hard to figure out the best part: the punter avoiding a tackle, the punter launching a football 40+ yards, an Arkansas player dropping a pick (possibly because an interception here would have been a touchback and cost his team yardage), or the mere fact that it happened at all. Also very funny is that the Razorbacks tried to do something tricky on the next drive and it did not work at all.

Bowl season is the best.