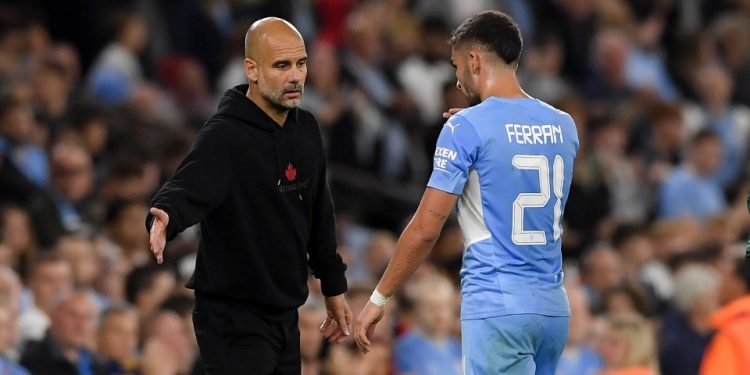 Pep Guardiola has insisted he is ‘happy’ for Ferran Torres as the Manchester City forward prepares for a move to Barcelona in January.

The manager has confirmed the ace will leave the Etihad Stadium in January to join the 50-year-old’s old club Barca, after the Premier League champions accepted a £46.7million offer from the LaLiga giants.

Torres has only been at City for 18 months and has scored 16 goals in 43 appearances during his time at the club.

The 21-year-old is not thought to have been unhappy at City but became keen on the move to the Camp Nou after becoming aware of Barca’s interest.

Guardiola was in a frank mood when asked about the deal, admitting he cannot have players at City who no longer want to be there.

But, asked if he was disappointed with his compatriot’s departure, Guardiola said: “Absolutely not.

“If you want to leave because you’re not happy here, you believe you’ll be happy in another place, you have to go.

“The career is short, one day it’s over. If he wants to leave, absolutely no disappointment. It’s his desire, I’m happy for him.”

Guardiola admitted Torres is likely to get more playing time at Barca, who are currently languishing in seventh place in LaLiga.

The Catalan club sit 18 points adrift of leaders and El Clasico rivals Real Madrid and are searching for reinforcements in attack following the enforced retirement of Sergio Aguero.

He said: “If we had just two or three attacking players then maybe Ferran would think he had more chance to play and stay longer.

“Always I have the feeling that when Barcelona or Real Madrid knock on the door of players then it is difficult to say no. So difficult. They are still the strongest teams in the world in terms of fashion, cities and many reasons.

“He is from Spain, Barcelona knock and I understand why he wants to leave.”

Torres has made just four appearances in the Premier League for City this season and that could be a big part of the reason he is keen for a change of club.

He has played second-fiddle to the likes of Riyad Mahrez, Bernardo Silva and Jack Grealish and at Barcelona he will most certainly become a regular in Xavi’s first team.