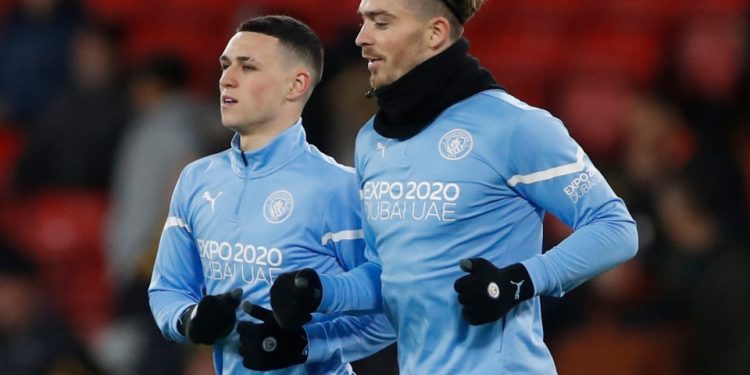 The pair played no part in City’s last outing, a 4-0 win at Newcastle, after reportedly arriving at a recovery session unfit to train having gone out to a club after their 7-0 win over Leeds earlier in December.

The City boss didn’t give anything away over whether Grealish or Foden will make a return on December 26, but he did shed some light on what his and the club’s expectations are from their players.

Guardiola said in his press conference: “They are not rules, I am not the police. I’m not saying what they have to do.

“Everyone is old enough and experienced enough to know exactly what they have to.”

The manager did, though, point out the importance of players continuing to exercise high levels of caution, due to the recent raise of COVID-19 cases.

Guardiola sent a subtle warning to Grealish, Foden and the rest of his Man City players over their conduct off the pitchGetty

He said: “We are living special circumstances in our lives, that we cannot live free like in the past, due to pandemic situation. Everyone has to try to follow as much as possible. We are not alone in this world.

“We have to be careful but you can take [care] and [still] get positive. We are exposed, so just be careful. We have spoken about that for a long time.”

Guardiola was also asked about Ferran Torres, and appeared to confirm the Spanish forward is close to a £50million January move to Barcelona.

And he insisted there would be no hard feelings over the 21-year-old’s exit to his former club.

Asked if he would be disappointed to see Torres go, Guardiola said: “Absolutely not.

“If you want to leave because you’re not happy here, you believe you’ll be happy in another place, you have to go.

“The career is short, one day it’s over. If he wants to leave, absolutely no disappointment. It’s his desire, I’m happy for him.”

Guardiola added: “If we had just two or three attacking players then maybe Ferran would think he had more chance to play and stay longer.

“Always I have the feeling that when Barcelona or Real Madrid knock on the door of players then it is difficult to say no. So difficult. They are still the strongest teams in the world in terms of fashion, cities and many reasons.

“He is from Spain, Barcelona knock and I understand why he wants to leave.”