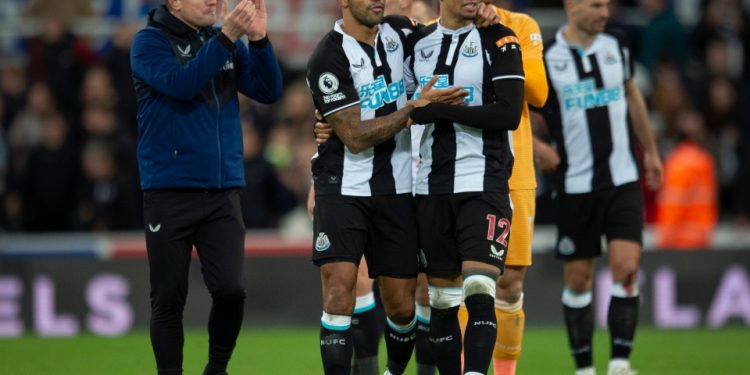 Newcastle United finally have the chance to spend some money after their Saudi takeover earlier this season – and, boy, do they need to.

Eddie Howe’s side currently sit second-bottom of the Premier League, but just two points from safety.

An inspiring display in a 1-1 draw with Manchester United showed they are on the right track under Howe.

Now they have a chance to bolster their squad in a bid to avoid the drop, with players across Europe getting linked with a move to Tyneside.

Kieran Trippier is one player who is reportedly close to sealing a deal to St James’ Park.

He appeared to say farewell to Atletico Madrid but who else could follow the former Tottenham defender in at St James’ Park?

New signings will get to play alongside Joelinton, a player reborn under HoweGetty

Trippier looks all but set to complete his return to the Premier League with a move to Newcastle this January.

The Atletico Madrid defender is set to sign for the club in a deal worth around £25million.

The right-back will be Howe’s first signing and will be a much-needed upgrade on the Magpies’ current options in that position.

He is, though, likely to have clauses in his contract should they be relegated.

Another area that Newcastle need to improve is at centre-back, and some reports say that Botman could be the man to help fix their defensive woes.

A fee of around £30m was reportedly being discussed, but the Telegraph are reporting that the Lille defender is not for sale.

It remains to be seen whether Newcastle are prepared to splash the cash in a desperate attempt to bring him to the club.

A tall left-footed centre-back, he’s a unique player and could be a difference maker if all parties can be pleased.

Could the former Newcastle man be set for a return to the club?

Wijnaldum is said to be unhappy at Paris Saint-Germain after his move from Liverpool in the summer, so why not try and bring him back to the northeast?

He scored 11 goals in 40 games in his first spell at the club, which lastest just one season.

Wijnaldum also has the leadership skills to help inspire the team to Premier League survival.

The former Arsenal captain is another out of favour player that Howe could sign this month.

The striker has now missed five consecutive games after being stripped of the armband at the Emirates.

If the Gunners can get money for the forward it’s likely they will do all they can to make the deal happen, but would he fancy a relegation battle?

Aubameyang could be heading for the exit door in Januarygetty

How Newcastle could look after the January transfer window…

Would this Newcastle team survive?

In Georgia, the stakes couldn’t be higher ahead of local elections

‘We lost everything’: Colorado wildfires destroy hundreds of homes