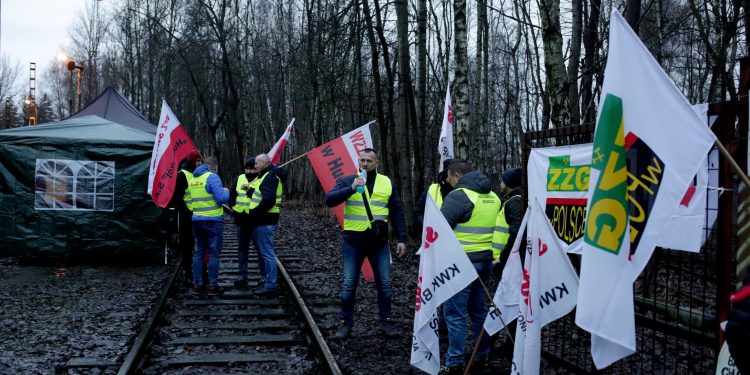 On Tuesday miners launched a two-day blockade of coal shipments from state-owned mining company PGG to protest what they say is inadequate pay for extra work.

“For several months now, due to an ongoing energy crisis across Europe and a shortage of energy resources, miners have been working overtime and on weekends to avoid interruptions in the supply of energy and heat,” the Solidarity trade union said in a Facebook post on Tuesday morning.

The miners also want their wages boosted to account for fast-rising inflation, which shot up to a 20-year high of 7.8 percent in November and is predicted to rise even higher next year.

“Miners are hated because they’re once again demanding something,” Bogusław Hutek, chief of the Solidarity mining union, told reporters on Tuesday. “We’re not demanding anything, we want someone to value our hard work.”

PGG spokesperson Tomasz Głogowski said the company will start talks once a mediator is appointed.

Miners staged a protest between December 21 and 23, complaining about a failure of talks with PGG. They are particularly outraged because reviving economies are increasing demand for power, leading to higher coal sales, but they’re not getting more cash.

Poland’s reserves of mined coal have dropped from 6.4 million tons last year to 2.5 million tons now — with many mine stockpiles falling below minimum legal requirements.

“Any disruption to coal deliveries could harm the rebuilding of reserves of fuel crucial to the stable functioning of several national generating stations,” Beata Jarosz-Dziekanowska, spokesperson for national grid operator PSE, told the PAP news agency.

PGG said last year it won’t be able to boost pay because Poland is waiting for the European Commission’s approval of public aid for the mining sector.

The government aims to spend 30 billion złoty (€6.5 billion) to keep Polish coal mines operating through the end of the decade. The long-term plan is to phase out coal mining by 2049, only a year before the EU has committed to becoming climate neutral.

The legislature is working on the scheme, and it’s due to be sent to the Commission later this month.

Poland uses coal to generate about 70 percent of its electricity, the highest level in the EU.

Although there is an upsurge in demand for coal, the fuel is doomed by the EU’s decarbonization drive and by increasing prices on the EU Emissions Trading System. Emission permits are over €80 per ton of carbon dioxide, nearly tripling over the past year and shooting up more than 15-fold over the previous five years.

A recent report by the Jagiellonian Institute and the Polish Academy of Sciences said the country could begin accumulating a massive oversupply of coal as soon as 2025 due to a steady shift to other sources of energy like offshore wind and nuclear power.

This article is part of POLITICO’s premium policy service: Pro Energy and Climate. From climate change, emissions targets, alternative fuels and more, our specialized journalists keep you on top of the topics driving the Energy and Climate policy agenda. Email pro@politico.eu for a complimentary trial.