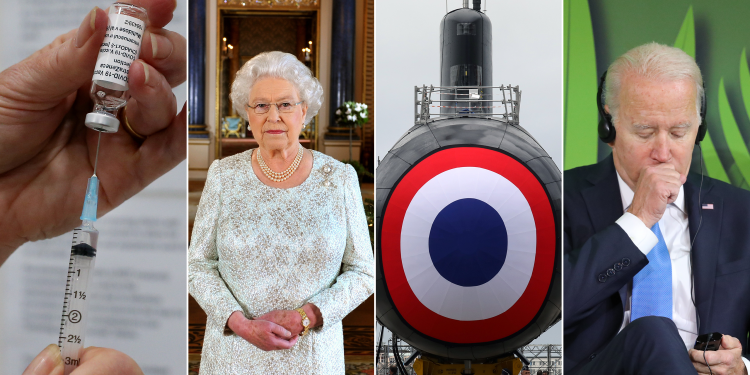 It started with an extraordinary attack on Capitol Hill in Washington, D.C., brought us the iconic meme of Bernie Sanders and his mittens, saw the Suez Canal blocked by the Ever Given container ship for six days (another source of viral memes), and brought us the diplomatic gaffe dubbed “Sofagate.” It was also marked by the Taliban’s return to power in Afghanistan, a spat between France and Australia over a canceled submarine deal, and the end of Angela Merkel’s 16-year reign as German chancellor.

Through it all, there was the coronavirus.

Now, as we all prepare to enter 2022 amid the pandemic’s fifth wave and the rise of the Omicron variant, there is a strong feeling of collective déjà vu. To reflect on a year that never felt like it really got going, we’ve compiled a list of our 20 most-read stories of 2021, taking you back to the events that had you clicking over the past 12 months.

20. Eric Trump hits out at Scottish plan to debate his father’s golf courses

It would have been nice to get through a year without a Trump on the list, but alas, Donald’s son Eric snuck in with a story featuring golf, Scotland and his dad’s money. Ahead of a Scottish parliament vote on whether to launch an investigation into the financing of the former U.S. president’s two golf resorts in Scotland, Eric Trump called the politician who called the debate a “national embarrassment.”

In March, we brought you a story featuring a shocking forecast: By 2045, sperm counts would reach zero. That’s according to leading scholar Shanna Swan, who told POLITICO we don’t have much time before most men may no longer be able to reproduce because of the impact of hormone-altering chemicals found in plastics, electronics and cosmetics.

Which leaves us wondering, could “Spermageddon” be the end of humanity as we know it?

As OnlyFans boasts 120 million users, it’s no surprise our story on the online content subscription service backtracking on its decision to ban pornography generated interest. Its initial move to ban “sexually explicit” content sparked protests from adult-content creators, bringing to light an issue centered around sex workers’ rights, inclusion and the power of big banks.

17. Why Australia wanted out of its French submarine deal

This year, AUKUS entered our vocabulary. It’s a term the French are not big on. The reason? It signifies what French Foreign Minister Jean-Yves Le Drian called “a stab in the back.” Le Drian was referring to Australia’s announcement that it would tear up a more than €50 billion French submarine deal in favor of nuclear-powered subs from the U.S., as part of a three-way strategic defense alliance with the U.K.

France claimed it found out about the snub just hours before the AUKUS announcement. But as our explainer showed, Paris could have seen it coming.

Belgium recalled its ambassador to Seoul in July after his wife got in not one, but two fights in South Korea. In the first bust-up, Ambassador Peter Lescouhier’s wife slapped a shopkeeper (which was caught on CCTV), and in the second, came to blows with a street cleaner. The incidents triggered a national scandal in South Korea.

Many of us entered 2021 hopeful that with coronavirus vaccine rollouts underway, we were headed back to normalcy. But in March, Austria announced it was suspending a batch of the Oxford/AstraZeneca vaccine as a “precautionary measure” while it investigated a person’s death and another’s illness after the jab. Many other countries soon followed suit.

Just over a week later, the European Medicines Agency said the vaccine was “safe and effective,” but would continue to study a possible link with very rare blood clotting disorders. Countries began administering it again, but the Austrian measure triggered an ongoing discussion about the potential side effects of the vaccine.

It took the Taliban just 10 days to take back control of Afghanistan after the U.S.-led withdrawal from the country in August. As Taliban fighters entered Kabul, Afghans who had helped foreign powers over the 20 years since the U.S. invasion in 2001 made 11th-hour attempts to flee. In footage broadcast around the world, masses of people were seen surging across the tarmac at Kabul Airport, clinging to the sides of planes in a desperate attempt not to be left behind. Many would be.

Across Europe, officials reacted with a mix of disbelief and a sense of betrayal at what they regarded as a mistake of historic magnitude.

As rollouts of coronavirus vaccines started around the world, Israel took an early lead. Within three weeks, 20 percent of the population had received a jab. How did it manage? POLITICO had the analysis.

In March, as the race to acquire coronavirus vaccines heated up and the EU fell behind, Dutch government officials told POLITICO they were ready to block shipments of AstraZeneca’s jabs to the U.K. if London didn’t agree to a deal to share them more fairly with the bloc. Which raised the question: Why was the EU lagging the U.K. in the first place …?

11. How the UK gained an edge with AstraZeneca’s vaccine commitments

Early in the vaccine rollout, it became clear the U.K. had managed to secure more doses of AstraZeneca’s vaccine quicker than the EU. How that had happened was a question that vexed Brussels. POLITICO found clues in the contracts the pharmaceutical giant had signed with London and Brussels. And as our story divulged, there was one key difference: The U.K.’s had much sharper teeth.

Going into 2021, we all knew a huge change was coming. After 16 years as the political queen of Europe, Angela Merkel’s reign as German chancellor was to come to an end. Who could possibly follow in her wake? Cue the biggest election of the year. Throughout the campaign, the vote and the coalition discussions that ended with Social Democrat Olaf Scholz named chancellor, our team brought you in-depth coverage via our German election landing page. Some of your favorite stories from our reporting: Why Germany’s red scare is real, Olaf Scholz: the Teflon candidate and 5 takeaways on pact to make Germany great again.

9. Joe Biden’s fart and other embarrassing royal moments for Americans

While global leaders were gathered in Glasgow to discuss the world’s most pressing environmental issues at the U.N.’s COP26 climate change conference, something quite unexpected stole the show.

U.S. President Joe Biden let it rip at Camilla, the Duchess of Cornwall. No, not in anger, but in, um … flatulence. It was the fart that stopped the nation — and led to the year’s most-read Declassified column.

8. How Europe fell behind on vaccines

Illustration by Anthony Gerace for POLITICO

The EU’s vaccination effort was meant to be a shining example of European solidarity. Instead, the vaccine rollout became a vaccine strollout, with decisions to prioritize process over speed and to put solidarity ahead of room for maneuver holding back the bloc back. POLITICO analyzed what went wrong.

7. ‘Millions of people’s data is at risk’ — Amazon insiders sound alarm over security

Illustration by James Dawe for POLITICO

“Imagine if a company the size of Amazon had a breach?” This was the question posed by a whistleblower who spoke with POLITICO about the tech giant’s data security practices. According to three former high-level information security employees, privacy and compliance failures had left Amazon vulnerable to potential breaches or hacks, putting millions of people’s personal data at risk.

In January, the European Commission made a drastic move — one that was out of character for an apostle of free trade and a champion of global equity. Infuriated that pharmaceutical giant AstraZeneca would fall short on its vaccine deliveries to the EU, the Commission announced measures to block international shipments. Word of the Commission’s decision sent diplomats and pharmaceutical company execs racing to assess the potential ramifications of the move, which had the potential to cut off vaccine supplies to many other countries relying on the EU’s production capabilities, including neighbors such as the U.K., close partners like Australia and Canada, and an array of developing nations.

5. The British monarchy has a succession problem

Britain’s longest-reigning monarch, Queen Elizabeth II, is enduringly popular. But a series of scandals, including allegations of racism and Prince Andrew’s ties to convicted sex offender Jeffrey Epstein, have taken the shine off the rest of “The Firm.” Oh, and don’t forget Netflix’s hit series “The Crown,” which one member of the royal family told POLITICO was “a fucking disaster” for their PR.

It’s always hard to step out of the shadow of a successful parent. But with a mum like Elizabeth, can Prince Charles ever really measure up?

After enduring four years in Washington’s freezer under Donald Trump, European leaders went into 2021 hoping for a reset with his successor Joe Biden. But given the opportunity in January to show the new administration it was serious about geostrategic collaboration, Europe opted instead to show Washington the finger.

Things went from bad to worse for AstraZeneca in March. Just weeks after numerous European countries suspended the use of its coronavirus vaccine amid concerns about rare blood clots, U.S. health officials raised new worries that it may have included “outdated information” from its vaccine trial that could have provided an “incomplete view” of its efficacy.

POLITICO’s live tracker of the COVID vaccine rollout around Europe was our second-most read story of the year — hardly a surprise, given the impact of the pandemic on peoples’ lives.

As our most-read story of 2021, this is clearly a question we all wanted the answer to: What will happen when Queen Elizabeth II dies?

Codenamed London Bridge, the plan for the days after her death has long been shrouded in secrecy. That is, until POLITICO obtained a series of documents laying out the details of everything including the state funeral, to be held 11 days after the monarch dies.

The documents reveal everything from what order people will be informed, the security operations to manage the crowds, how many days of national mourning there will be, and extensive plans for Charles’ accession to the throne (codenamed Operation Spring Tide). Makes for some morbid, but fascinating, reading.

Katie Taylor reportedly in talks to fight former UFC champion and MMA legend Cris Cyborg, who would be making her professional boxing debut in scenes reminiscent of Floyd Mayweather vs Conor McGregor