Pope calls for dialogue on world stage in Christmas message 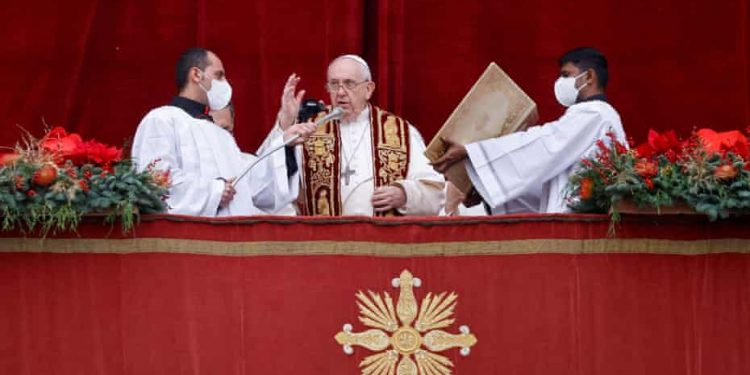 Pope Francis has used his Christmas Day message to call for dialogue on the world stage as he looks to resolve conflicts ranging from family feuds to threats of war.

The pontiff listed tensions in several countries in Asia, Europe and Africa as he delivered his Urbi et Orbi address, and called on individuals and world leaders to talk rather than dig in their heels. This aversion to discourse, he said, has been worsened by the Covid-19 pandemic.

“Our capacity for social relationships is sorely tried; there is a growing tendency to withdraw, to do it all by ourselves, to stop making an effort to encounter others and do things together,” he said from the central balcony of St Peter’s Basilica in the Vatican.

“On the international level, too, there is the risk of avoiding dialogue; the risk that this complex crisis will lead to taking shortcuts rather than setting out on the longer paths of dialogue. Yet only those paths can lead to the resolution of conflicts and to lasting benefits for all.”

He added: “We continue to witness a great number of conflicts, crises and disagreements. These never seem to end; by now we hardly even notice them. We have become so used to them that immense tragedies are now being passed over in silence, we risk not hearing the cry of pain and distress of so many of our brothers and sisters.”

Before an unusually small crowd, which was reduced by Covid restrictions and the weather to only several hundred, he asked God to “give serenity and unity to families”, praising those who strive to keep them and communities together in such divisive times. “Let us ask him for the strength to be open to dialogue. On this festive day, let us implore him to stir up in the hearts of everyone a yearning for reconciliation and fraternity.”

He used the word “dialogue” 11 times in a speech of little more than two pages as he spoke to people huddled under rain parkas and umbrellas.

The day before, during his Christmas Eve midnight mass in St Peter’s Basilica, the pontiff had called for more solidarity with those living in poverty.

He urged the congregation of about 2,000 people to “value the little things in life”, adding: “On this night of love, may we have only one fear: that of offending God’s love, hurting him by despising the poor with our indifference.”

The pope referred to the shepherds who Christians believe watched over the infant son of God. “That is where Jesus is born: close to them, close to the forgotten ones of the peripheries,” he told the faithful.

“He comes where human dignity is put to the test. He comes to ennoble the excluded and he first reveals himself to them; not to educated and important people, but to poor working people.

“God tonight comes to fill with dignity the austerity of labour. He reminds us of the importance of granting dignity to men and women through labour, but also of granting dignity to human labour itself, since man is its master and not its slave. On the day of life, let us repeat: no more deaths in the workplace. And let us commit ourselves to ensuring this.”

To compete with the US in healthtech, emerging Europe and the UK must continue to collaborate