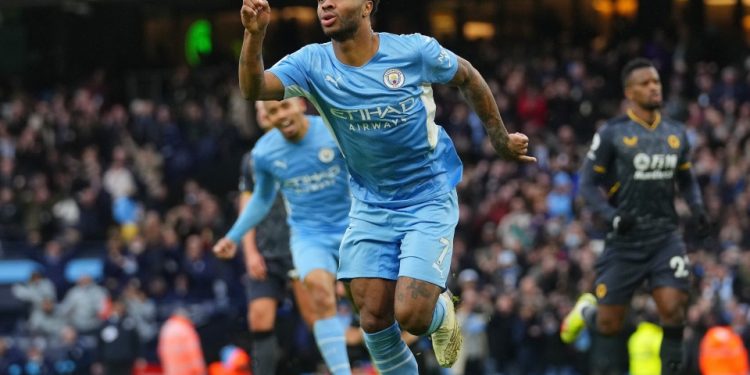 2022 is here and the Premier League action doesn’t wait around with fixtures this weekend kick-starting the New Year with mammoth battles at the top of the table.

Man City take on fourth-placed Arsenal on Saturday afternoon and Chelsea host Liverpool on Sunday for a top four face-off.

Raheem Sterling reached a landmark 100 Premier League goals in December and could continue his form against a side he loves scoring against, ArsenalGetty

Jarrod Bowen has been dependable for David Moyes this seasonGetty

Pep Guardiola’s side go into this match eight points clear of Chelsea after the Blues stumbled at Brighton in midweek, while City secured a close 1-0 away win at Brentford.

They won’t have to travel too far for their next away trip to see in the New Year though as they head to North London where Arsenal have won four in their last four.

City have now overtaken Liverpool in terms of goals scored in the Premier League as they hit a total of 51 before 2022, Jurgen Klopp’s side have netted 50 already and the Blues aren’t far behind with 43.

Arsenal struggled against Liverpool earlier this season and were thumped 5-0 at Anfield, it may be a difficult one to face at home with the addition of Mikel Arteta being forced to miss the game after testing positive for COVID-19.

Ilkay Gundogan and Raheem Sterling were rested midweek and in typical Guardiola rotation they are likely to line up this weekend in the starting XI.

Gundogan netted against Arsenal last time out in their 5-0 victory in August, while Sterling netted in the opening two minutes back in February.

Man City have won 11 of their last 12 meetings with the Gunners too which doesn’t bode well for the New Year start for the North London outfit.

talkSPORT EDGE tip: Ilkay Gundogan and Raheem Sterling to score at 6.21/1 (Betfair). Get up to £50 money back as cash with this bet when you sign up here.*

Harry Kane has scored two in his last two games and is set to start 2022 to put the low scoring start of the season behind him.

Emmanuel Dennis for Watford on the other hand has been in incredible form scoring throughout the season to help save Watford from staying in the relegation zone.

He’s netted eight overall, but five of those have been netted in his last six games against the likes of Man United, Leicester, Chelsea, Brentford and West Ham.

Claudio Ranieri, despite the great goal scoring form of his players but have lost five of their last games, their last win was their surprising 4-1 romp over Man United in November.

This London derby could be a close one with Tottenham facing their fifth game in just under two weeks.

Another London derby kicks off 2022 with a high hopes of a thrilling battle that sees fifth-placed West Ham taking on mid-table Crystal Palace at Selhurst Park on Saturday evening.

There’s plenty of potential from this match with Patrick Vieira’s side with a plethora of striking options from midfield to their strikers.

Forwards Odsonne Edouard, Christian Benteke, Jordan Ayew and Jean-Philippe Mateta have all got on the scoresheet this season.

Each player is often available among a heavy rotation with the packed December schedule giving opportunities to Mateta to get his first goal at Norwich last time out.

The Hammers won’t make it easy for these players though as they’re looking to ensure their fifth place position to start 2022 with a slight advantage over European chasing sides in the table.

Jarrod Bowen, Said Benrahma, Tomas Soucek and Michaill Antonio to name a few have been in inspired form this season with heaps of goals and assists between them.

David Moyes will be looking for more of the same from Bowen who has now assisted 11 this season already.

But Palace have only won two of their last 13 meetings with West Ham.

talkSPORT EDGE tip: West Ham to win, Benrahma and Edouard to score at 25.4/1 (Paddy Power). Place this bet and get your money back as cash up to £20 when you sign up here.*

Chelsea host Liverpool on Sunday afternoon for what promises to be a close affair as they both lost vital points in midweek.

The Reds fell to Leicester 1-0 picking up only their second loss of the season.

This latest run of games suggests there’s still plenty of goals in each side but the defences are starting to show cracks where other title contenders can exploit, meaning plenty of goals are expected in the biggest two matches of the season.

Romelu Lukaku has scored two goals in two games now, prior to that he’d only played 77 minutes in the last ten Premier League games as he suffered an injury and had to slowly be reintroduced in the squad.

He could remain the biggest threat to Liverpool this weekend given his display against Aston Villa and Brighton and is back to full fitness with 90 minutes under his belt on Wednesday night.

Liverpool remain the biggest threats in scoring though with Mohamed Salah but he has blanked in his last two games as the Reds have struggled to be as potent in attack.

Betfair: Get £50 Money Back As Cash – CLAIM HERE

Place 5 x £10 Sportsbook bets on Football and get money back as cash if any lose. Maximum refund per qualifying bet is £10, x5 refunds available. Payment restrictions apply. T&Cs apply. 18+ begambleaware.org

Paddy Power: Bet £20 and get it back as Cash if it Loses – CLAIM HERE

New customers only. Place your FIRST bet on any sportsbook market and if it loses we will refund your stake in CASH. Max refund for this offer is £20. Only deposits made using Cards or Apple Pay will qualify for this promotion. T&Cs apply. Paddy’s Rewards Club: Get a £10 free bet when you place 5x bets of £10+. T&Cs apply. 18+ Begambleaware.org

Arsenal v Man City and Chelsea v Liverpool Power Price: Get 1+ goal in each half

Brentford v Man City betting offer: Get up to £50 money back AS CASH

Chelsea v Brighton: Get up to £50 money back AS CASH on clash with Betfair

Aston Villa and the question of stepping stones