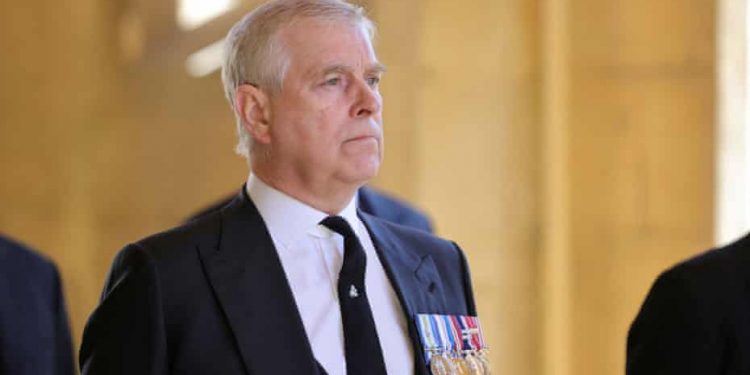 Lawyers for Prince Andrew and Virginia Giuffre, who has long accused the royal of sexual abuse, faced off in Manhattan federal court on Tuesday, in his attempt to dismiss her civil lawsuit.

The arguments via videoconference came a day after the unsealing of a 2009 settlement between Giuffre and the late financier and sex offender Jeffrey Epstein.

Reporters missed up to 15 minutes of arguments. A teleconference number only provided audio at 10.15am, after proceedings began.

Giuffre, who accused Epstein and his ex-girlfriend Ghislaine Maxwell of sexual abuse and forcing her into sex with Prince Andrew at age 17 – an accusation he vehemently denies – received $500,000 in her settlement with the late financier.

Using Giuffre’s maiden name, the settlement contains a provision releasing “second parties and any other person or entity who could have been included as a potential defendant … from all, and all manner of, action and actions of Virginia Roberts, including state or federal, cause and causes of action”.

Andrew has contended that this clause bars Giuffre from suing him. He is not mentioned by name in the settlement agreement.

On Tuesday, the judge, Lewis Kaplan, asked Andrew’s lawyer, Brad Brettler: “What is a ‘potential defendant’?”

Later, Brettler said: “I don’t even understand how there could be any question as to whether ‘other potential defendants’ had a meaning. Clearly, Ms Giuffre intended to release a broad category of individuals including royalty, including businessmen.”

Brettler also said Epstein “would never want to have to be dragged into a lawsuit were she to sue Prince Andrew later”.

Kaplan said: “We don’t have Mr Epstein here to say that’s in fact what his view was.”

At the end of the proceeding, the judge said: “You’ll have a decision pretty soon.”

Epstein, who also counted former presidents Bill Clinton and Donald Trump among influential associates, killed himself in custody in New York in 2019. Maxwell, 60, was convicted on sex trafficking charges last month. Her lawyers have said they will appeal.

Andrew has been dogged by his links to Epstein and Maxwell and by the Giuffre suit.

On Tuesday, Rettler reiterated what was said in a 29 October court filing: “Giuffre settled her sex trafficking and sexual abuse claims against Epstein in 2009. In doing so, she provided Epstein with a general release of all claims against him and numerous other individuals and entities.

“To avoid being dragged into future legal disputes, Epstein negotiated for this broad release, insisting that it cover any and all persons who Giuffre identified as potential targets of future lawsuits, regardless of the merit – or lack thereof – to any such claims.”

That filing also said: “Because Prince Andrew is a senior member of the British royal family, he falls into one of the expressly identified categories of persons, ie, royalty, released from liability under the release agreement, along with politicians, academicians, businessmen and others allegedly associated with Epstein.

“As a third-party beneficiary of the release agreement, Prince Andrew is entitled to enforce the general release contained therein.”

David Boies, appearing for Giuffre, argued that the parties on the agreement could handle their agreement as they jointly wished, “at least so long as the third party has not reasonably relied to their detriment on what they have promised”.

Boies also said there was no “reasonable” evidence Andrew knew about the agreement before being sued by Giuffre.

As part of the litigation, Giuffre’s lawyers have requested documents including proof of Andrew’s now famous claim that he cannot sweat.

Giuffre has alleged that the prince was “sweating profusely all over me” at a London nightclub on an evening when, she claims, they had sex.

Andrew told the BBC that could not be true, saying: “I have a peculiar medical condition which is that I don’t sweat or I didn’t sweat at the time.”

He also said that on the night cited by Giuffre, he brought his daughter Beatrice to a late-afternoon children’s party at a Pizza Express restaurant in Woking, Surrey. The prince says he was then at home with his children all night.

Oral arguments in the attempt to dismiss Giuffre’s case took place amid sustained and damaging fallout over Andrew’s links to Maxwell and Epstein.

Maxwell, the daughter of the late British press baron Robert Maxwell, was convicted on five counts for luring girls as young as 14 into Epstein’s orbit for him to sexually abuse.