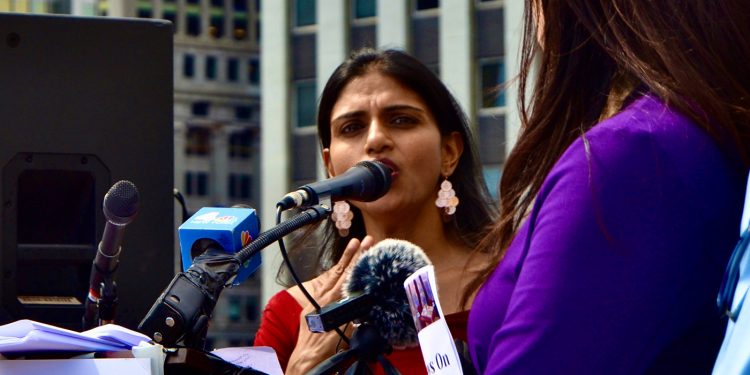 Christine Thurman is a mother of three. She’s engaged and is the breadwinner in her Chicago household. She also works as a waitress, living primarily off of tips because she’s paid a subminimum wage of $2.13 per hour.

She can neither raise her children nor put food on the table on that hourly rate. That’s in part why she’s fighting to get fairer wages.

The federal minimum wage is $7.25 an hour, but federal law allows an employer to pay well below this hourly rate as long as an employee makes at least $30 in tips per month.

The subminimum wage is just one manifestation of the systemic racism that has been entrenched in the United States’ identity since its founding. While the federal minimum wage was last raised in 2009, the subminimum wage has been set at $2.13 per hour since 1996. But the concept of tip wages is even older—a relic of the Civil War. After emancipation, tipped wages were used as a way for businesses to not have to directly pay formerly enslaved people. Their income was dependent on the generosity of strangers.

Then when the concept of a minimum wage was introduced, these workers were left behind. In order to get support for the New Deal from Southern Democrats, Franklin Roosevelt introduced a federal minimum wage for workers, but excluded industries dominated by communities of color, like domestic and agricultural work.

This deeply entrenched problem leaves people like Thurman, who works a full 40-hour week, feeling underpaid for the time she puts in. “If you work hard you should be paid fairly,” Thurman says.

Some restaurateurs recognize that. Chef Russell Jackson, who owns Reverence in New York City, pays his staff a high and livable wage of $22.50 per hour, nearly twice the state minimum wage of $12.50. New York state eliminated the subminimum wage for many tipped industries in 2020, but the hospitality industry notably was excluded from the change in law.

With 40 years of experience in the food industry, Jackson says he’s never seen such an impact of his wage policy on his employees. He believes paying a living wage fosters a sense of financial pride that is rare in the restaurant industry.

Jackson put his money where his mouth is, so to speak, by opening an investment account for his employees. “What we do in the afternoon while we’re prepping—we’re talking about trading stocks and crypto.”

Jackson is an outlier, however—not many restaurateurs make the additional effort and investment in their staffs’ financial well-being. But he isn’t necessarily alone. Jackson is part of a bigger effort led by some of the most passionate voices in the fight to reform wages, including the national One Fair Wage coalition and its president, Saru Jayaraman.

Founded in the days after 9/11, One Fair Wage was built to help restaurant workers who struggled after the national tragedy. A total of 79 chefs, waiters, and other staff working at the Windows on the World restaurant, on the 107th floor of the World Trade Center, lost their lives in the attack.

The organization has since blossomed into a full-fledged national movement led, in part, by the staff who weren’t at work on that day and thus survived. Twenty years after 9/11, the founders of One Fair Wage say the struggle for restaurant workers is ongoing—only now it’s pegged to the day-to-day tragedy of the global COVID-19 pandemic, which caused a massive disruption of the restaurant and hospitality industries.

That’s not only translated into lost jobs and wages, but it also exacerbated existing problems within the industry, including sexual harassment of staff by both owners and customers.

Relying on tips to earn a living, creates a “power dynamic between male customers and female servers, which is the source of the sexual harassment. It got so much worse with the pandemic,” Jayaraman says.

According to a study from One Fair Wage in December 2020, 71% of women in the food service industry have experienced at least one incident of sexual harassment during their time in the business.

This is a longstanding problem, according to a 2018 report from the Harvard Business Review, as many as 90% of women and 70% of men in the restaurant industry reported experiencing some kind of sexual harassment on the job. And according to One Fair Wage, incidents of reported sexual harassment of restaurant workers by their customers increased by 31% over the last year.

“Tips went down 15%–75%, and a huge, overwhelming majority [of servers] said customer hostility went way up; obviously health risk went up,” Jayaraman adds. “Over 50% of women said sexual harassment just skyrocketed. Thousands of women said that male customers repeatedly said, ‘take off your mask so I can see how cute you are before I decide how much to tip you.’”

That hostility continues to escalate, especially in locales where restaurant workers have been tasked with enforcing vaccine mandates like those in New York City. In part because the city is conducting surprise inspections and each violation could come with a fine of up to $1,000, restaurants have largely been abiding by the mandates.

But that means low-wage workers are being tasked with checking vaccination cards, and in some cases being forced to turn people away, which has already happened at restaurants across the country.

While activists hope that Jackson’s model of paying higher wages is a sign of the future of the food service industry, counting on restaurant owners to voluntarily raise their wages isn’t reliable, and any systemic changes would have to be addressed in federal wage laws.

“These types of policies where they are just doing it on their own is no substitute for actual minimum and subminimum wage policy,” says Sylvia Allegretto, an economist and co-chair of the Center on Wage and Employment Dynamics at the University of California, Berkeley.

Some political leaders are at least trying to do something to raise worker pay.

In January 2021, Senate Democrats introduced the Raise The Wage Act, which would raise the federal minimum wage to $15 per hour and raise the tipped wage to $12.50 per hour by 2025. The act would also phase out the subminimum wage. A vote to include the measure in the third COVID-19 stimulus bill failed, however.

In April, President Biden issued an executive order that raised the minimum wage for all federal government employees and contractors to $15 per hour.

On the state level there’s a different story, at least for workers with disabilities. Colorado, California, and Hawaii, among other states have passed laws that will phase out their subminimum wages for disabled workers, but not across the board.

Some private companies also have stepped up to raise wages at their restaurant chains. In June, Chipotle raised its average starting wage to $15 per hour, up from $11 per hour. The wage increase is specifically for employees who otherwise would make $11–$18 per hour. McDonald’s recently took similar action, raising its minimum wage to $15 per hour for its company-owned and -operated restaurants. The new minimum wage does not apply to independent franchises.

Those initial steps haven’t come easily, and momentum to enact a national policy to provide livable wages face opposition from right-wing pundits who claim, inaccurately, that food service workers have been making more money on unemployment insurance and other financial assistance.

According to One Fair Wage, a staggering 63% of restaurant workers had challenges accessing unemployment insurance because workers in most states, including New York, have been told they can’t even qualify for unemployment insurance because their subminimum wages are too low. Much of the financial relief workers have received has come from relief funds launched by nonprofit organizations.

Jackson’s approach to wages is much like what’s used in traditional Japanese restaurants.

In Japanese culture, tipping is considered rude because it suggests that customers don’t think the workers make a livable wage, or it comes across as arrogant. Many Japanese restaurants in the U.S. have adopted this practice, too. In New York City, this has been common practice for almost a decade. Sushi Yasuda embraced this practice in 2013, and since then, many more restaurants in the city have taken on similar strategies.

It’s not just limited to New York. Restaurants across the country have changed their business models to eliminate tipping in recent years, including the Mediterranean restaurant Gorji in Dallas, and Eldeslie Farm, a farm-to-table restaurant in Wichita, Kansas.

Using this strategy, restaurants factor a livable wage into the prices on the menu, rather leaving it to the discretion of the consumer.

But at the end of the day there’s only so much that can be done without a change in the federal law. Whatever the law ends up being, Jayaraman has offered up a name—The Windows on the World Act—which would commemorate the restaurant workers who lost their lives on 9/11.

Are single-sex schools the safe option after abuse scandal?