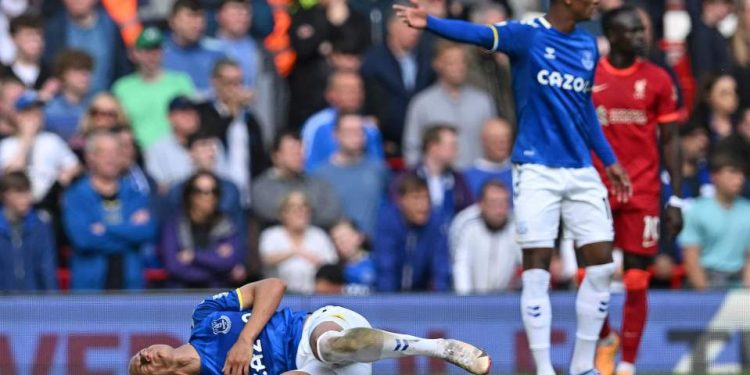 Liverpool legend Jamie Carragher is facing criticism after he accused Everton star Richarlison of faking injury during Sunday’s Merseyside derby, despite pictures from the match showing his pain was genuine.

The Brazilian has even responded on social media after suffering a nasty-looking injury to his ankle.

Richarlison was in the wars at Anfield, but there was an element of ‘boy who cried wolf ‘over his theatricsAFP

Tempers flared in a feisty contest at Anfield, with plenty of challenges flying in, but the Reds came out on top of their blue rivals once again in a 2-0 victory for Jurgen Klopp’s men, thanks to goals from Andy Robertson and Divock Origi.

However, it was a difficult afternoon for the hosts who for large parts of the game struggled to break down the Toffees’ defence.

Whilst there wasn’t any goal-action to report in the opening 45 minutes, there was a big incident between Thiago and Richarlison in stoppage-time of the first half.

The Brazil forward went down after losing out in a battle with the Spaniard, and remained there as the referee waved play on.

The Liverpool players did, which then sparked fury from Abdoulaye Doucoure who caused a melee as he lashed out at Fabinho in an attempt to stop play.

The incident also earned a strong reaction from Carragher who, speaking on commentary duty, angrily told Richarlison to ‘get up’ and claimed he does it ‘every week’.

It’s true that it wasn’t the first time Richarlison had hit the deck, having fallen to the turf earlier in the first-half after appearing to be caught in the face by Fabinho.

And Carragher again accused the Toffees star from acting hurt, as he said on Sky Sports: “Honestly, get up, every week I watch him play like that! Get up, carry on.”

“He’s been down three times already, [there’s] nothing wrong with him.”

However, after seeing a replay of the incident which showed the Everton man had painfully rolled his ankle after trying to stop Thiago, the former centre-back changed his tone.

“Maybe looking at the challenge on Richarlison, maybe I was being a little bit harsh on him,” added Carragher.

“Maybe he just goes over on his ankle. [But] he just goes down so much in the game, he’s gone down twice already in this game where you’re not quite sure he needed to.”

Richarlison posted a message on social media about his ankle after the game, responding to the claims he was play-acting, and revealed it was good news despite the initial pain.

“Thanks for the messages,” he posted on his Instagram stories in his native tongue. “Thank God it was nothing serious.”

Reacting to the hubbub, Jamie O’Hara said on Monday’s talkSPORT Breakfast that Carragher was out of order for his ‘harsh’ criticism of the Everton man.

It’s all kicking off in the Merseyside Derby #LIVEVE |

“I don’t think he was [theatrical],” said the former Tottenham midfielder.

“I think the two they were moaning about in the first half, one was a corner that came at him really quick and he headed it away and it frazzled him a little bit, and the second was an innocuous challenge that actually hurt him.

“I think it was a little bit harsh to say he was cheating, he wasn’t. I thought Richarlison played really well.

“The two [times] when he went down was when he was actually hurt.

“I think it was a bit harsh from Carragher to say ‘get up, get up’.”

Richarlison did recover from the ankle roll and completed the 90 minutes, but O’Hara said it could easily have been a different story.

“You don’t know how he’s feeling, he might have done his ACL or his MCL, those [kind of] challenges, you don’t know,” added the pundit.

“But there was contact and he was in pain.

“I understand you can play on, get on with the game, no problem.

“But don’t start making him out to be a cheat, because I disagree with that.”