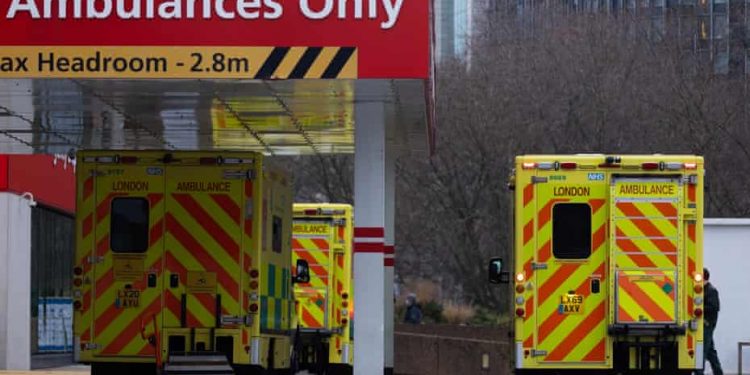 The Omicron variant of coronavirus appears to be milder, with a 20%-25% reduced chance of a hospital visit and at least a 40% lower risk of being admitted overnight, the first UK data of its kind has showed.

But as daily Covid cases topped 100,000 for the first time on Wednesday, experts warned that high transmissibility means the NHS is still at risk of being overwhelmed.

In what was described by scientists as a “qualified good news story”, two studies on Wednesday pointed to a lower risk of hospitalisation with Omicron.

An Imperial College outbreak modelling team led by Prof Neil Ferguson analysed hospitalisations and vaccine records among all PCR-confirmed Covid cases in England between 1 and 14 December. The dataset included 56,000 cases of Omicron and 269,000 cases of Delta.

Their report found that the risk of any attendance at hospital was 20% to 25% lower with Omicron versus Delta, and 40%-45% lower when the visit resulted in admission for at least one night. For the small percentage of people who had neither been previously infected with Covid nor vaccinated, the risk of hospitalisation was about 11% lower for Omicron versus Delta.

Ferguson said that while it was “good news”, the assessment did not substantially change Sage modelling pointing to 3,000 daily hospitalisations in England at the peak of the wave next month without restrictions beyond the plan B measures currently in place.

While the analysis shows evidence of “a moderate reduction” in the risk of hospitalisation associated with Omicron compared with Delta, Ferguson said, “this appears to be offset by the reduced efficacy of vaccines against infection with the Omicron variant”.

“Given the high transmissibility of the Omicron virus, there remains the potential for health services to face increasing demand if Omicron cases continue to grow at the rate that has been seen in recent weeks,” he added.

The Imperial study found that having had a previous Covid infection reduced the risk of hospitalisation from Omicron by about half compared with a first infection, the report adds.

Those hospitalised with Omicron had on average shorter stays – 0.22 days compared with 0.32 days for Delta – but more data is needed, particularly in older age groups among whom Omicron is currently less prevalent. It is too early to assess the risk of admission to intensive care and death, but the researchers say greater reductions in risk are possible.

Dr Jim McMenamin, the national Covid-19 incident director for Public Health Scotland, welcomed a “qualified good news story”, but said that it was “important we don’t get ahead of ourselves”.

The Scottish study, which has yet to be peer reviewed, is based on small numbers and most Omicron cases were in people aged 20 to 39, meaning researchers were unable to assess the severity of the disease in elderly people who are more vulnerable. The researchers logged 15 hospitalisations with Omicron, about a third of the 47 admissions that modelling suggested they should expect given the characteristics of those infected.

“The potentially serious impact of Omicron on a population cannot be underestimated. And a smaller proportion of a much greater number of cases that might ultimately require treatment can still mean a substantial number of people who may experience severe Covid infections that could lead to potential hospitalisation,” McMenamin said.

It came as the number of UK daily infections hit a record high of 106,122 despite previous signs that the wave was starting to plateau.

NHS England also said 301 Covid admissions were recorded by hospitals in London on 20 December, up 78% week on week and the highest number for a single day since 7 February.

At Westminster no decisions have yet been taken by ministers about what restrictions, if any, should be introduced after Christmas, with many Tory backbenchers and some cabinet ministers sceptical about the need for further action.

Contingency plans have been drawn up, but Downing Street sources insist these have not yet been put to ministers, and no further announcements are now expected before Christmas.

The shadow health secretary, Wes Streeting, urged the government to provide certainty. “The risk to the NHS remains. Boris Johnson needs to explain why people and businesses in England aren’t being told what the coming weeks look like, when those in Wales, Scotland and Northern Ireland have clarity,” he said.

The Liberal Democrats’ health spokesperson, Daisy Cooper, accused the prime minister of subjecting the public in England to “a Christmas of confusion and consternation”. “Once again Boris Johnson has crossed his fingers, closed his eyes and hoped for the best,” she said.