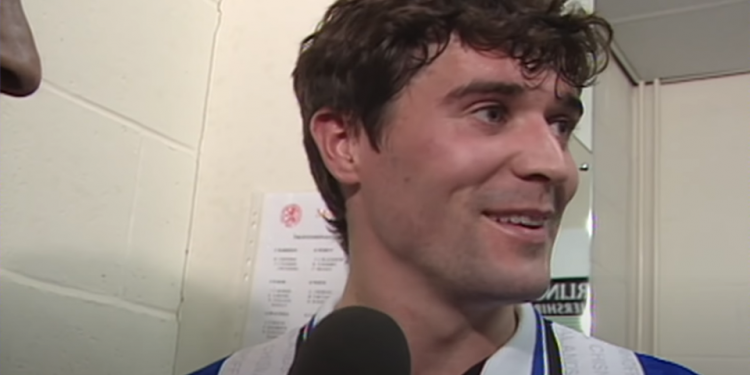 Roy Keane is known for being a wind-up merchant – and that was evident during his playing days as a Manchester United midfielder.

In 1996, a fresh-faced Keane – not yet the club captain – was being interviewed after United had beaten Middlesbrough and secured their third Premier League title under Sir Alex Ferguson.

And, with the likes of Ryan Giggs, Paul Scholes, and Nicky Butt listening in, Keane through in a cheeky dig at Newcastle, having pipped them to the title, despite at one stage appearing on course to finish the season as champions.

The Magpies were 12 points clear of Man United at one point in a campaign that saw their manager, Kevin Keegan give his famous ‘I’d love it if we beat them’ interview.

But the Red Devils did what any Sir Alex Ferguson side did best – never give up.

So on the final day of the season, David May, Giggs and Andy Cole sealed a 3-0 win against Boro.

When asked if he thought they had lost the title to the Magpies earlier in the season, the Irishman joked to Sky Sports at the time: “We thought it was all over! No, we kept plugging away and we always knew Newcastle would slip up.”

This led to a raucous of laughter from the United players, who were watching on and seemed to be egging their teammate on.

Keane added: “Luckily enough they did, and we just kept plugging away and, as I said, I think we definitely deserved it.

“The young lads have come in and been absolutely fantastic as well.”

“Everyone said, ‘Well, a point would’ve done’, but we always come to win matches and that’s what we’ve done today,” the former midfielder said.

“We didn’t worry about the other game, we know that if we got three points today, we’d win the league and that’s what we’ve done.”

It was a good season for the club, who became the first team to win the league and cup double twice having beaten rivals Liverpool to the 1996 FA Cup.