Russia downplays Ukraine invasion, but US makes no concessions 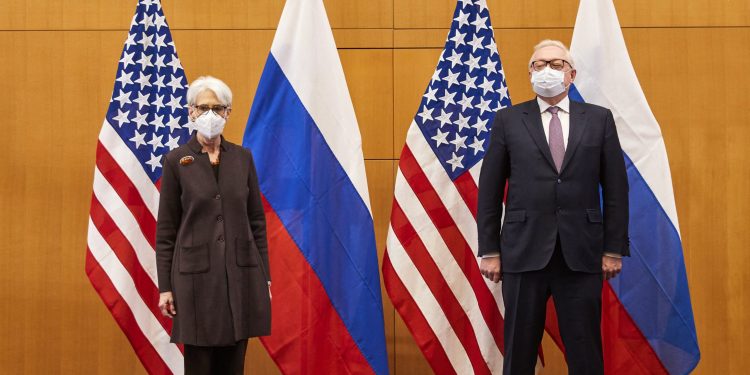 GENEVA — The United States and Russia managed a first day of security talks Monday without a breakdown that might give Moscow any basis to carry out a threatened military strike on Ukraine.

But even as Russia’s lead negotiator, Deputy Foreign Minister Sergei Ryabkov, insisted the Kremlin had no plan for another invasion of its western neighbor, it was clear that Moscow and Washington are confronting virtually unbridgeable differences on many issues — including a repeated demand by the Kremlin for hard guarantees that Ukraine and Georgia will never join NATO.

The wide gulf between the former Cold War rivals became clear as Ryabkov and his U.S. counterpart, Deputy Secretary of State Wendy Sherman, held dueling news conferences at the end of the daylong negotiations, which were conducted at the U.S. Mission in Geneva.

Discussions over the threat of a Russian military incursion and demands for an array of security concessions by the West will continue on Wednesday in Brussels at NATO headquarters, and on Thursday in Vienna at a meeting of the Organization for Security and Cooperation in Europe.

The highlight from the first round of deliberations Monday, however, was Ryabkov’s insistence that Russia was not preparing to move against Ukraine, which it last invaded in 2014.

But on the subject of a potential NATO expansion, Ryabkov was uncompromising, requesting “ironclad, waterproof, bulletproof, legally binding guarantees” that Ukraine and Georgia would not become members of the military alliance.

“This is one of the areas where we have the greatest difference of views with the U.S.,” Ryabkov said, adding of the Russian position: “That would be a welcome change for the better in the position of NATO. We are fed up with the loose talk, half-promises, misinterpretations of what happened … behind closed doors. We do not trust the other side.”

In her own call with reporters, Deputy Secretary of State Wendy Sherman described a “frank and forthright discussion” with Ryabkov. The U.S. delegation arrived at the talks with “a number of ideas [of] where our two countries could take reciprocal actions that would be in our security interest and improve strategic stability,” Sherman said.

Specifically, the “preliminary ideas” raised by the United States included “missile placements,” Sherman said, and the U.S. delegation “made clear that the United States is open to discussing the future of certain missile systems in Europe along the lines of the now-defunct [Intermediate-range Nuclear Forces] Treaty” — which former President Donald Trump withdrew the United States from in 2019.

“We shared that we are also open to discussing ways we can set reciprocal limits on the size and scope of military exercises, and to improve transparency about those exercises, again, on a reciprocal basis,” Sherman said.

POLITICO and other media outlets reported over the weekend that the United States was willing to discuss the placement of missiles in Ukraine and the scope of regional military exercises when the U.S. and Russian delegations met Monday in Geneva.

However, Sherman said the U.S. delegation was “firm” in “pushing back on security proposals that are simply non-starters to the United States” — including Russia’s demand that the North Atlantic Treaty Organization formally bar Ukraine from entry into the military alliance.

“We will not allow anyone to slam closed NATO’s open door policy, which has always been central to the NATO alliance,” Sherman said. “We will not forgo bilateral cooperation with sovereign states that wish to work with the United States. And we will not make decisions about Ukraine without Ukraine, about Europe without Europe, or about NATO without NATO.”

Alexander Ward contributed to this report.

Test Detects SARS-CoV-2 in Breath, May Work as COVID Alarm in Enclosed Spaces