Scepticism as Peng Shuai letter emerges claiming ‘everything is fine’ 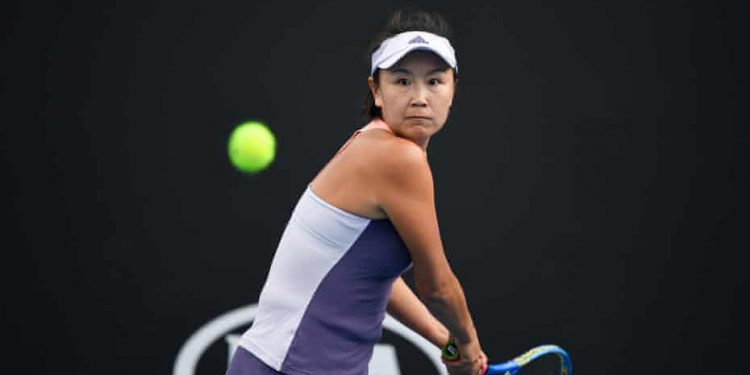 The head of the Women’s Tennis Association (WTA) has said he is now even more concerned for the welfare of Peng Shuai after Chinese state media published a letter purportedly from the Chinese player.

Peng, a former world doubles No 1, has not been heard from publicly since she alleged on social media that a former vice-premier of China, Zhang Gaoli, had sexually assaulted her.

The 2 November post on China’s Twitter-like Weibo was removed within half an hour and censors blocked numerous related terms including “tennis”, but the claims still went viral. There has since been mounting concern for Peng’s welfare, with Naomi Osaka among tennis stars and others calling for answers.

Earlier this month, the WTA issued a statement calling on the Chinese government to investigate allegations made by Peng. WTA chairman and chief executive Steve Simon later said he had received “assurances” from China that she was safe but no one from the WTA was able to contact her to confirm.

On Wednesday China’s state-run English-language outlet, the China Global Television Network, published a letter on Twitter which it claimed was sent from Peng to Simon.

Garbiñe Muguruza held off Anett Kontaveit 6-3 7-5 to add the 2021 WTA Finals title to her previous wins at Wimbledon and the French Open.

Muguruza (pictured), who ends the year as the world No 3, had already beaten Kontaveit in the group stages and it was the Spaniard who prevailed again for her 10th career WTA singles title.

Kontaveit went behind in the third game but broke back immediately to level the set at 2-2 – but Muguruza took the last four games of the set to win it in 43 minutes. The Estonian led 5-3 in the second, but her opponent found another surge to take the title.

‘I think it’s a very good season overall. I think it’s the year that I’ve won the most titles,’ Muguruza said afterwards. ‘I might not have won a Grand Slam, but I feel like I’ve been happier and more stable.’

“Regarding the recent news released on the official website of the WTA, the content has not been confirmed or verified by myself and it was released without my consent,” the letter said.

“The news in that release, including the allegation of sexual assault, is not true. I’m not missing, nor I am unsafe. I’ve just been resting at home and everything is fine. Thank you again for caring about me.”

It also requested that the WTA verify any future statements with her and seek her consent before publishing. The screenshot of the letter, which included a visible cursor in the text and was not published anywhere inside China, prompted skepticism.

“The statement released today by Chinese state media concerning Peng Shuai only raises my concerns as to her safety and whereabouts,” said Simon. “I have a hard time believing that Peng Shuai actually wrote the email we received or believes what is being attributed to her.”

The advocacy group, Chinese Human Rights Defenders (CHRD), said the statement “should not be taken at face value”.

“The Chinese government has a long history of arbitrarily detaining people involved in controversial cases, controlling their ability to speak freely, and making them give forced statements,” said William Nee, CHRD’s research and advocacy coordinator. “Until Peng Shuai is free, the burden of proof should be on the Chinese government to prove she is not detained.”

Simon has previously suggested China’s lack of action on the case could jeopardise future tours in China, saying the organisation was only interested in “doing what’s right”.

“Peng Shuai displayed incredible courage in describing an allegation of sexual assault against a former top official in the Chinese government. The WTA and the rest of the world need independent and verifiable proof that she is safe,” he said on Wednesday.

“I have repeatedly tried to reach her via numerous forms of communications, to no avail. Peng Shuai must be allowed to speak freely, without coercion or intimidation from any source.

“Her allegation of sexual assault must be respected, investigated with full transparency and without censorship. The voices of women need to be heard and respected, not censored nor dictated to.”

‘Thanks for your help, Sticky’: Michael Rosen on learning to walk again after Covid