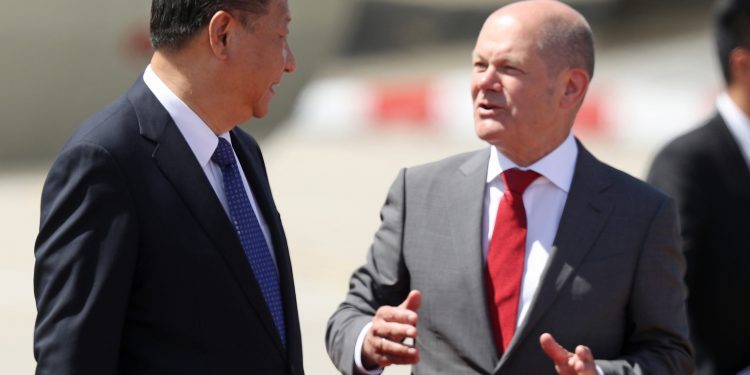 German Chancellor Olaf Scholz and Chinese President Xi Jinping vowed to deepen economic relations in a first phone call on Tuesday — but readouts by both sides did not mention human rights or the situation in Hong Kong.

In remarks that appeared to echo the stance of his predecessor Angela Merkel, the new German leader told Xi that German-Chinese relations should be developed “in the spirit of mutual respect and mutual trust,” a readout by Chinese state-run press agency Xinhua said.

Controversially, Scholz also said that he hoped the stalled EU-China investment deal “will take effect as soon as possible.” The remark would seem to contradict the coalition agreement Scholz’s Social Democratic Party struck with two other parties to form his current government. That agreement said the investment deal with China — pushed forward at Merkel’s behest — cannot be ratified at this stage.

The investment deal was concluded at the end of last year but its ratification process was halted amid human rights concerns and China’s response to them: After EU countries last year sanctioned four Chinese officials involved in mass internment of Uyghur people in the Xinjiang region, Beijing sanctioned EU lawmakers — a reaction that caused the European Parliament to pause the deal until China lifts the sanctions.

A German readout of the call was less specific, saying both leaders “discussed, among other things, the deepening of the bilateral partnership and economic relations, the development of EU-China relations and international issues.” Scholz’s office did not reply to a request for comment on whether the Chinese readout correctly represented his remarks about the EU-China deal.

According to the Chinese readout of the call, Scholz said he would seek “to host a new round of German-Chinese government consultations, strengthen practical cooperation in clean energy, digital economy and service industries.”