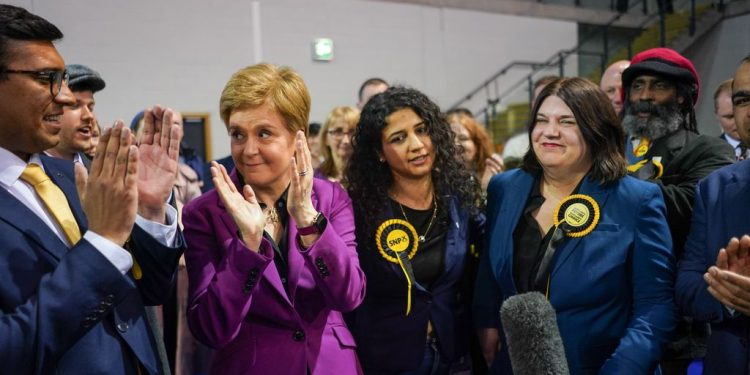 EDINBURGH — The Scottish Tories pointed the blame squarely at Boris Johnson after they sustained heavy losses in Scotland’s local election.

The Tories lost 61 seats and slipped into third spot in Scotland behind Scottish Labour in elections to local authorities across Scotland, in a result Scottish Tory leader Douglas Ross admitted was “very disappointing.”

Thursday’s elections, across local councils in London and in many parts of England, Scotland and Wales, were Johnson’s first electoral test since he was fined by police for attending lockdown-busting parties in Downing Street. While Johnson’s party fared badly in Scotland and London, elsewhere in England was a more mixed picture, giving the U.K. prime minister just enough to keep his critics at bay.

However, in Scotland, where voters have long disliked Johnson, it was clear any remaining electoral shine had come off.

“It was certainly the Partygate issue that dominated the discussions I had with voters who were reluctant to come out and support us like they have in the past,” Ross told the BBC, citing the scandal over coronavirus rule-breaching gatherings in Downing Street.

He stopped short of calling for Johnson to go, but said the prime minister “simply cannot ignore the message that has been sent by voters” across Scotland.

The Scottish Tory leader was one of the first senior Tories to call for Johnson to resign back in January, before promptly reversing his position due to the war in Ukraine.

The U-turn derailed his party’s campaign, which was dominated by questions about Johnson’s position and why Ross had back-pedaled on his call for the prime minister to quit.

Scottish Labour and the pro-independence Scottish National Party — which finished in clear first place — were the main beneficiaries of Conservative losses. The Scottish Liberal Democrats and the SNP’s power-sharing allies in the Scottish Greens also made a small number of gains across Scotland.

Once dominant in Scottish politics, Scottish Labour fell to historic lows after the 2014 independence referendum and had finished third behind the SNP and Conservatives in every election at local, devolved and national level since 2016.

The SNP also took advantage of Tory woes to win an overall majority in Dundee, while they remained comfortably in first place overall nationally.

Scottish First Minister Nicola Sturgeon said her party had “won the election by a country mile.”

The only party to have a worse day than the Scottish Tories was the Alba Party, led by former first minister Alex Salmond as a vehicle for nationalists dissatisfied with the SNP. Salmond’s party failed to win a single council seat despite contesting more than a hundred.

Some Conservatives turned on their Scottish leader Ross as results came in.

“It was Douglas who U-turned, Douglas who flipped, and Douglas who backed the PM,” Adam Tomkins, a former Tory MSP well-respected in Tory circles, tweeted.

“He and his team need to own the consequences, not pass the buck,” Tomkins added.

The Scottish Tories lost their position as the largest party in two councils, including Perth and Kinross, widely seen before the vote as a “bellwether” that would signal how the party had performed. Gains made there under popular former leader Ruth Davidson in 2017 were largely reversed Friday, with the SNP emerging in first place.

Perth and Kinross Tory councilor Chris Ahern told POLITICO before polling day that he and his colleagues had been “dropped in it” by Johnson as they braced for losses. However, he also said he was worried about the impression voters have of Ross.

Scottish Tory insiders complained during the campaign of struggles to motivate their normally reliable voters. One, who campaigned largely in Perth and Kinross, said Friday that the losses there were down to low turnout in the Tory base.

“From the doors it wasn’t that people were changing [parties] — they were just less enthused to vote,” they said.

Tavex Group, the market leader in complete gold trading services in Northern Europe, is consolidating its position in Romania