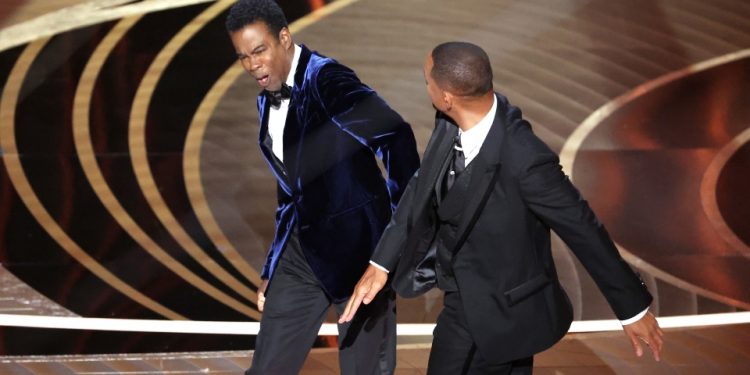 The Williams family have been responding to Will Smith slapping comedian Chris Rock at the Oscars.

Smith won the best actor award at the ceremony for his portrayal of Richard Williams, the father and coach of tennis icons Venus and Serena, but the evening was mired in controversy.

The actor appeared to take offence at a gag comedian Rock made about wife Jada Pinkett Smith’s short haircut before taking to the stage and striking him in front of the star-studded audience in Los Angeles.

Pinkett Smith has previously spoken about her struggles with alopecia and said it is what prompted her to shave her head.

In a second clip, the sportswoman admitted she ‘had to put her drink down’.

Richard Williams was the subject of the Hollywood blockbuster and the early stages of him coaching his daughters and their upbringing in Compton.

Venus and Serena went on to win a combined 62 Grand Slam titles over their careers and Williams senior reacted to the incident.

(Serena, Venus and Williams family members, you deserved SO much better!) pic.twitter.com/E42W6YfvGN

Nate Diaz shows Will Smith how to slap, by doing it on UFC chief Dana White

“We don’t know all the details of what happened,” Williams said through his son Chavoita LeSane. “But we don’t condone anyone hitting anyone else unless it’s in self-defence.”

Smith later apologised to many people, including the Williams family, for the incident.

In a statement posted to Instagram the actor said: “I would like to publicly apologise to you, Chris. I was out of line and I was wrong.

“I am embarrassed and my actions were not indicative of the man I want to be. There is no place for violence in a world of love and kindness.

“I deeply regret that my behaviour has stained what has been an otherwise gorgeous journey for all of us.”

Smith concluded his apology by saying: “I am a work in progress.”

Going underground: Belgrade is set to finally get its metro

What’s the beef with cows and the climate crisis?