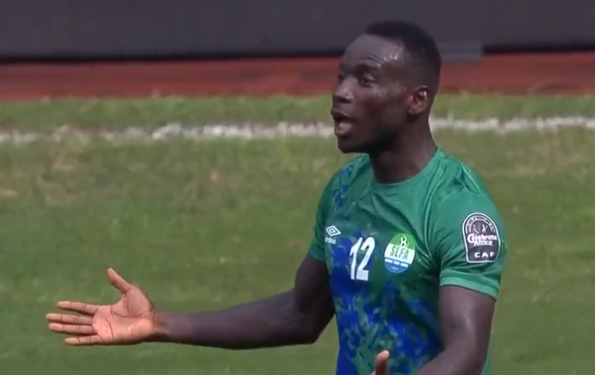 There won’t be any better feeling than scoring a goal for your country at a major tournament. You do have to make sure the goal stands before you get lost in the elation though.

However, Sierra Leone striker Alhaji Kamara was guilty of not checking to see if his goal against Algeria in the Africa Cup of Nations was given.

That feeling when you thought you’d scored, did a quirky celebration only to find out the goal doesn’t countsky sports

Early in the second half of Sierra Leone’s AFCON 2022 opener, Kamara thought he’d opened the scoring as he bundled the ball home after meeting a cross from the left.

The striker turned away to celebrate, recreating the famous lion celebration that former Swansea star Bafetimbi Gomis became famous in the Premier League for.

However, the hilarious celebration was brought to an abrupt end when the Algerian players’ questions for an offside were answered.

The decision left Kamara crestfallen, but he can have no complaints as replays show he was clearly offside. The clash between Sierra Leone and defending champions Algeria went on to finish goalless.

A great result for Sierra Leone but Kamara will no doubt be experiencing huge embarrassment as he did the adventurous celebration all for nothing in front of those watching in Africa and across the world.

It appeared Kamara had broken the deadlocksky sports

Kamara, who plies his trade for Danish outfit Randers, is something of a quirky character, though, as shown when he was playing for Swedish side IFK Norrkoping.

He initially appeared to take his second yellow card in the closing stages of a league match in August 2016 well, but what happened next showed he really didn’t.

Kamara was heard shrieking, presumably at the disappointment of being sent off, as he ran off the pitch and headed straight down the tunnel.

Alhaji Kamara goes mental after being sent off in the Swedish league!

This is absolutely insane!

E-learning market – an area with huge potential for education platforms