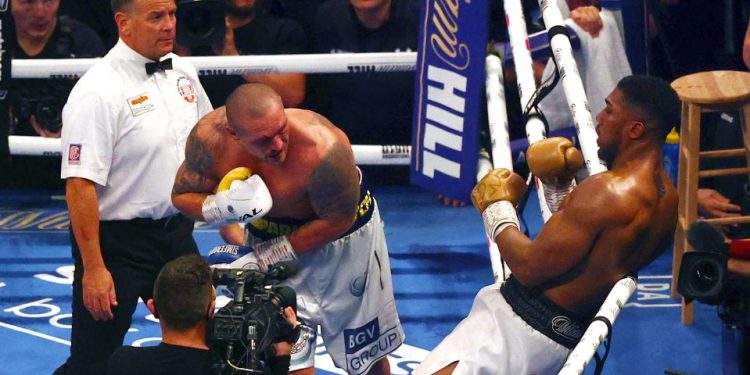 Anthony Joshua has been told he will lose to both Oleksandr Usyk and Tyson Fury and will be left with ‘nothing to bring to the table’.

The Brit relinquished his world titles yet again in September to the Ukrainian in a lopsided affair and was scheduled to head straight back in for an immediate rematch.

Joshua has activated his rematch clause with Usyk for 2022AFP

However, a step aside deal was mooted to allow Tyson Fury to fight Usyk and unify the division once and for all, even though it was swiftly declined.

Joshua was so convincingly beaten at the Tottenham Hotspur Stadium, there were rumours he was going to restructure his coaching team and involve American trainers.

Yet talkSPORT host and avid boxing fan Simon Jordan believes it matters little what Joshua does next as he believes both Fury and Usyk would beat the Brit.

“As a fighting man, he has got to fight Usyk,” Jordan told talkSPORT. “He’s got to right that wrong and win back the belts that he handed over to Usyk.

“So he is in a challenging position, Joshua, because commercially-speaking, does he wait to get paid for the Joshua vs Fury fight and take a big bag of money? Does he take step aside money now and lose all credibility?

“Or does he fight Usyk again and lose again and then be a finished article?”

“I think, if he is sensible for himself, he takes the step aside money and gets to fight Fury,” Jordan added.

“If he is a fighter, as we are all supposed to believe he is, he gets in the ring and fights Usyk.

“He is going to put himself at a career-ending position if he loses to Usyk again, because he has got nothing to bring to the table besides a once big reputation.”

Bank of Spain governor pushes back on inflation warnings