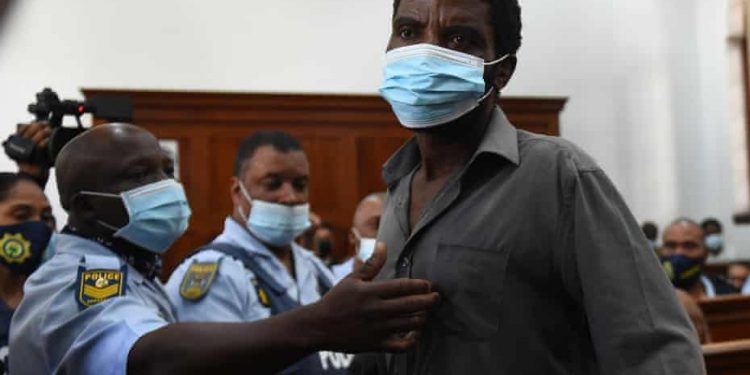 A fire that devastated South Africa’s parliament has been contained after a two-day battle, firefighters said, as a man appeared in court to face charges of starting the blaze.

Flames broke out in the Cape Town complex before dawn on Sunday, spreading to the National Assembly, the roof of which collapsed, threatening artworks and artefacts housed in an older section.

The blaze was initially declared under control on Monday but then flared up again, fanned by strong winds.

A 49-year-old man, Zandile Christmas Mafe, was arrested in the complex on Sunday. He appeared briefly in court on Tuesday to answer charges of breaking into and setting fire to parliamentary buildings and intention to steal property, including laptops, crockery and documents.

Bearded and dressed in a grey shirt with knee-length shorts, he removed his mask after arriving in court and turned to face the TV cameras and press photographers.

His attorney, Luvuyo Godla, who is defending him pro bono, said the defendant pleaded not guilty, while prosecutors argued against granting him bail. He was remanded in custody until 11 January pending further inquiries, which depend on when investigators can accessthe parliament building.

No casualties have been reported in the fire, but the damage has shocked the country. The blaze tore through the wood-panelled assembly where parliamentary debates are held and the president makes his annual state-of-the-nation address.

The parliament’s spokesperson, Moloto Mothapo, said “the entire chamber where the members sit … has burned down”.

The fire started in the older part of the complex, a section that once housed South Africa’s first parliament. Completed in 1884, the section is where parliament keeps national treasures, including about 4,000 heritage pieces and artworks, some dating from the 17th century.

The fire then spread to the newer National Assembly and a third building housing the upper house, the National Council of Provinces. Investigators said the fire broke out in two separate areas and the water sprinkler system did not work properly because the water was cut off.

Surveillance cameras showed the suspect in the buildings at about 2am local time. “However, security only saw him at 6am, when they looked at the screens after being alerted by the smoke,” said the public works minister, Patricia de Lille, told AFP.

“CCTVs were working. The problem is that there was no monitoring of the CCTV cameras on that fateful night,” she told a news conference on Monday. “Certainly, there was a security breach,” she added, saying this was under investigation.

The fire broke out a few hundred metres from St George’s Cathedral, where the anti-apartheid icon Desmond Tutu’s ashes were interred on Sunday while the blaze raged, a day after his funeral.

Last March a fire broke out in the older wings of parliament but was quickly contained.

Cape Town experienced another large fire in April when a blaze on Table Mountain, which overlooks the city, ravaged part of the University of Cape Town’s library holding a unique collection of African archives.

South Africa has an unusual political arrangement in that its parliament is in Cape Town while the seat of government lies in Pretoria, more than 800 miles (1,300km) to the north. The country’s economic and financial hub is Johannesburg.