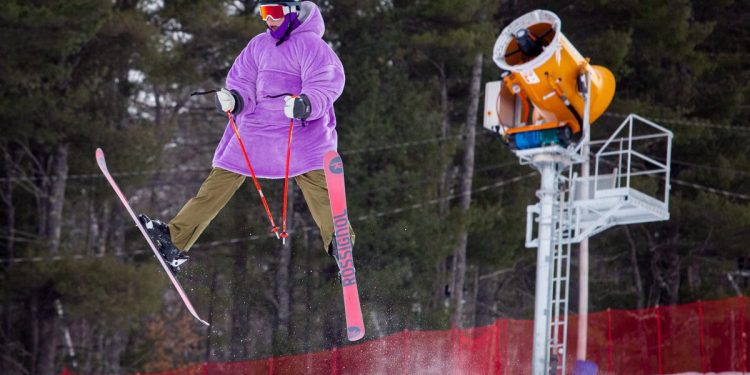 By Lori Valigra and Elizabeth Miller

A skier jumps into the air in front of a large snow-making machine at Shawnee Peak in Bridgton on Wednesday, Feb. 16, 2022. Modern advances in snow-making technology are helping Maine ski areas stay open despite the warming climate. Credit: Troy R. Bennett / BDN

BRIDGTON, Maine — Billy Dolliver’s blue eyes twinkled at the mountain snow. Mid-20 temperatures kept the ski trail from getting slushy. The sun was warm enough so he did not freeze on the lift.

The 72-year-old has skied the Shawnee Peak slopes since age 12, when his boatbuilder father made his first pair of skis out of barrel staves. He has noticed that winters have been getting warmer with less snow, but skiing is better than ever because of modern grooming and snowmaking.

“It’s really amazing that I can sit here and tell you that the ski quality is better now than it was 40 years ago with the temperatures rising,” he said.

Billy Dolliver, 72, shushes through a turn at Shawnee Peak in Bridgton on Wednesday, Feb. 16, 2022. Dolliver has been skiing the mountain since he was 12 and said, despite climate change, conditions are better than ever, thanks to modern snow-making techniques. Credit: Troy R. Bennett / BDN

Poor snow conditions have pressured smaller ski slopes across the country. Unable to face the costs of adapting to warmer winters, many in New England have become less competitive or closed. To stay in business, ski resorts have had to make more snow while investing millions of dollars in energy-efficient equipment to minimize their environmental impact. That balance will decide the fate of the industry.

Temperatures are rising globally as pollution traps more heat, which is affecting the amount of snow falling at ski fields and resorts nationally. Although climate change generally means less snow overall, parts of inland Maine have been among the regions seeing increases recently as storms draw more moisture from the warming Atlantic Ocean.

But winter rain has become more common since the mid-1970s, eroding snowpacks. The average minimum temperature in the Shawnee Peak region during winter has risen nearly 6 degrees since 1975, while average snowfall rates have declined in the spring, according to weather station data from nearby North Conway, New Hampshire.

Unreliable snow conditions are affecting ski resorts and activities globally. Man-made snow use for the Winter Olympics games has increased since the 1980s, with this year’s Beijing games being held in an arid climate that required it to be the first to use all man-made snow to assure uniform competition conditions.

At Shawnee Peak and other Maine ski areas, one big challenge is freeze-thaw events, where snowfall is followed quickly by rain and then a cold spell that turns slush to ice. Those events have become more frequent over the last 15 years, so more aggressive snowmaking is a necessity, Ralph Lewis, general manager of Shawnee Peak, said. The resort spends half its budget on snowmaking.

“We’ll see an increase in precipitation going forward, and more of it is going to fall as rain,” Ryan Gordon, a hydrogeologist at the Maine Geological Survey, said. “But I think places like Shawnee Peak and other big mountains that have invested in snowmaking technology are going to do OK.”

So far, Shawnee Peak and other major ski resorts in Maine have been able to keep up with the snowmaking necessary for business to thrive. Skiing and related hotel and restaurant activities for the state’s 18 alpine ski resorts contribute $1 billion and 5,000 jobs to Maine’s economy, Dirk Gouwens, executive director of the Ski Maine Association, said. Nationwide, snowboarders, skiers and snowmobilers contribute tens of billions of dollars to the economy each year, a University of New Hampshire analysis found.

“As the efficiencies of the equipment have increased, we’ve been able to make more snow to make up for any deficiencies that we may have in the weather,” Gouwens said. “The ski industry in Maine has been remarkably consistent and has seen more demand over the years.”

Shawnee Peak, the oldest major alpine ski area in the state that opened in 1937, ranks third among the most-visited ski slopes in the state with 40 trails. It was the premier place to ski in Maine until the 1980s, when it fell behind other ski resorts because it lacked snowmaking equipment.

The ski resort installed its first snowmaking system in 1981, but the mountain was revived in earnest in 1997, when a new owner invested $1.2 million to upgrade the resort, including chairlifts. Since then, millions of dollars have gone into more efficient snowmaking and snow-grooming machines. The resort regularly spends $600,000 a year on new equipment, with the priority on snowmaking machines.

The inability to make big investments has thinned out ski areas and resulted in consolidation over the past several decades in Maine and across the nation. Nationally, 462 resorts operated during the 2020 to 2021 winter season, down 15 percent compared to nearly 30 years before, according to the National Ski Areas Association.

Maine has lost 79 ski areas in its history, most of them mom-and-pop slopes where skiers were introduced to the sport, according to the New England Lost Ski Areas Project. That compares with 525 across the other five New England states. Not all closures were because of the inability to make snow. High liability insurance premiums were factors, Gouwens said.

Man-made snow is formed just below the freezing point, when the weather is 28 degrees Fahrenheit or colder. Water is pumped to the snow machine and then forced at high speed through a nozzle by pressurized air. The snow machine ejects a fine mist of water, some of which evaporates and cools the remaining droplets, which fall to the ground as snow.

That process, called “evaporative cooling,” is similar to the way evaporating sweat cools down a person. Evaporation is a natural process, so snow machines do not require energy to freeze water. The pumps and the air compressors use the most electricity at the ski resort, along with lifts. New snow machines use less compressed air, which is one way to reduce the amount of electricity required. Using less air has cut energy costs for Shawnee Peak by a third or more.

The resort uses between 35 million and 50 million gallons of water per season to make snow, which melts into nearby lakes and streams in the spring. Lewis said the new snow machines can be turned on and off more quickly than the older equipment, which allows him to make snow quicker and use less power to do so.

The man-made snow is denser than natural snow and melts slower, so Shawnee Peak only makes snow for about 30 days for a four-month ski season. Because of warming temperatures, it is making snow toward the end of November or early December, two weeks later than five years ago.

“We have shorter windows of cold temperatures to make snow so we have to get up and running quickly and shut down quickly,” Lewis said.

Shawnee Peak has installed solar panels on two buildings and is experimenting with newer LED lights to reduce energy consumption, early steps toward more climate-friendly operations, with Boyne aiming to release net zero emissions across its 10 ski areas in North America by 2030.

“I don’t think there’s anybody in the industry that would tell you they’re not aware of the climate and the changes we’ve seen,” Lewis said. “It’s certainly on the forefront of our minds.”

This story was produced through a partnership with Climate Central, a nonadvocacy science and news group. Jen Brady and Kaitlyn Weber of Climate Central contributed data reporting.

Europe’s need to catch up with software-led New Defense