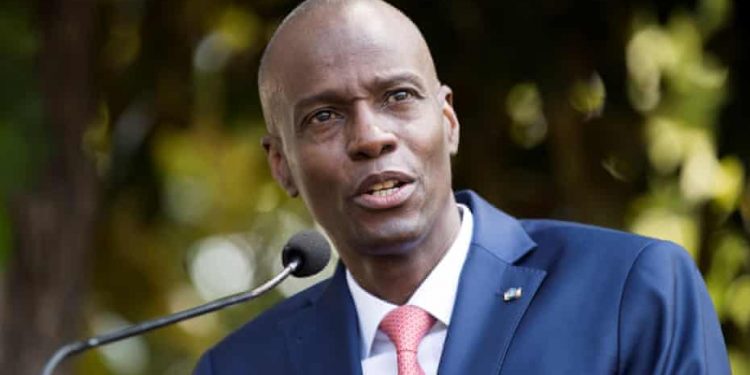 A suspected member of the group involved in the murder last year of Haiti’s president, Jovenel Moïse, has been detained while transiting through Panama after his release by a court in Jamaica.

Mario Antonio Palacios, 43, a former member of the Colombian military, is accused by Haitian authorities of being part of a mercenary group that tortured and killed Moïse and wounded his wife, Martine, during an attack on Moïse’s private home in July.

Palacios has admitted in a media interview being in Moïse’s bedroom during the assault in which the president died, but has denied being involved in the killing.

Palacios entered Jamaica illegally and was detained in prison after his arrest in October while the courts considered an application from Haiti for his extradition.

Jamaica instead ordered his deportation to Colombia, but while transiting to his home country via Panama he was intercepted at the airport and is believed to have been put on a flight to the US, which, like Haiti, has issued an Interpol red notice requesting his arrest.

Panama authorities have issued no public comment on the affair but a person familiar with the matter in Panama confirmed that Palacios had been detained.

A video shared with Reuters by the source, who declined to be identified, showed two immigration agents escorting a man, whose face was not shown, through what appeared to be Panama’s airport.

An official source quoted by the Colombian news site El Tiempo said: “It seems very certain that Palacios will be sent to the United States because the [legal] process there was pushed forward urgently and they have a plane ready for him.” According to some reports, Palacios was being taken to Miami.

Palacios’s detention in Panama marks the latest twist in the saga of the investigation into Moise’s assassination, which remains largely mired in mystery.

Jamaican authorities ruled that Haiti’s request for Palacios’s extradition did not meet its legal requirements. “This request, as a matter of law, could not proceed, could not be processed and was destined to fail,” said Paula Llewellyn, Jamaica’s director of public prosecutions (DPP), on Friday.

According to reports, Palacios had not been named as a suspect in the murder but was instead being sought on a charge of armed robbery.

It appeared at the weekend that the Colombian would be allowed to travel home after he was photographed shaking hands with the Colombian ambassador to Jamaica, Jairo Clopatofsky Ghisays.

Palacios is believed to be the last of the alleged group of mercenaries to be detained.

In an interview given while he was still in hiding, he insisted he had no knowledge of who killed Moïse. “I don’t know who killed him. I say it from the heart for my family, for my children,” he told the Week, though he did admit he had entered Moïse’s house.

According to a report prepared by the Haitian police and leaked to various media outlets, Palacios – also known by his nickname of “Floro” – is accused of being one of the instigators of Moïse’s assassination on 7 July.

He is accused of being one of 26 Colombians and two Haitian Americans who made up a hit squad that stormed the president’s private residence in the middle of the night claiming to be part of a US Drug Enforcement Administration operation.

Moïse was shot a dozen times and also appeared to have had an eye gouged out during the assault.

None of the surviving Colombians captured in Haiti have yet been put on trial, and the motivation behind the assassination remains unclear amid contradictory claims.

On Saturday, gunmen tried to kill Haiti’s prime minister, Ariel Henry, during an event to mark the anniversary of the country’s independence, officials say.

The incident happened at a church in the northern city of Gonaïves. Video posted online showed the prime minister and his entourage scrambling toward their cars amid intense gunfire.