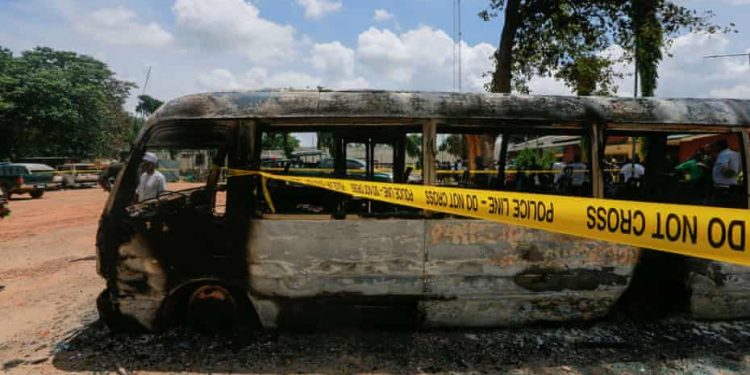 Hundreds of prisoners including scores of detained terrorists were on the run in Nigeria after suspected Boko Haram militants attacked a prison near the capital, Abuja.

Gunmen armed with explosives blasted into Kuje medium-security prison, on the outskirts of Abuja at about 10pm on Tuesday, freeing 600 of the prison’s 994 inmates, government officials said.

More than 300 escapees were swiftly recaptured, but the rest remained at large and were being pursued by security forces, according to Nigeria’s defence minister, Bashir Magashi.

One prison guard was killed in the attack and three others injured.

“They came in numbers, they gained entrance into the prison and they released some of the inmates,” Magashi said at a press briefing near the prison on Wednesday morning. “We believe they belong to a particular group, and most likely they are Boko Haram because we have a sizeable number of Boko Haram [fighters] that were in detention and presently we can not locate any of them.

“About 64 of them were in the prison … they have all escaped,” he said before adding: “The situation is under control.”

Witnesses living near the prison facility said the attack lasted for more than an hour with security forces arriving at the scene long after the inmates had escaped.

Iliya Makama, a local resident said: “ At about 10pm we heard the sounds of gunshots continuing for about 40 mins. In between the shooting we started hearing loud explosions.

“After a little over an hour, they started running past my window. At first I was lying down on the floor with my wife … All this while there were no sirens or helicopter patrol from the police or soldiers.”

Prison breaks have grown more common in Nigeria, where last year more than 1,800 prisoners escaped from Owerri Prison in the south-eastern Imo state, after heavily armed men attacked with gunfire and explosives.

The attack in Kuje will cement fears over the increasing capacity of armed groups across the country, launching daring attacks increasingly close to the capital, with little to no resistance from overwhelmed and under-equipped security forces.

It came hours after gunmen attacked an advance convoy of President Muhammadu Buhari’s security personnel, in his home state of Katsina, north-west Nigeria, before a scheduled visit by the president.

On Wednesday, Buhari’s spokesperson said: “Attackers opened fire on the convoy from ambush positions but were repelled by the military, police and DSS personnel accompanying the convoy.

“Two persons in the convoy are receiving treatment for the minor injuries they suffered. All the other personnel, staff and vehicles made it safely to Daura.”

Unrest has increased across Africa’s most populous country, with security forces battling on several fronts, from a 13-year jihadist insurgency in the north-east, to “bandit” terrorist and jihadist groups across the north-west, kidnapping for ransom and terrorising rural communities.

The movement of jihadist groups from the north-east to northern and central Nigeria, forming alliances with other armed groups, has caused growing alarm. In Niger State, local government officials have said the groups have effectively taken over communities only a few hundred kilometres from Abuja, exploiting a lack of rural security.

Imagining a post-populist media in CEE