The Melt-out Begins, No Lowland Snowstorm, and Mountain Snows 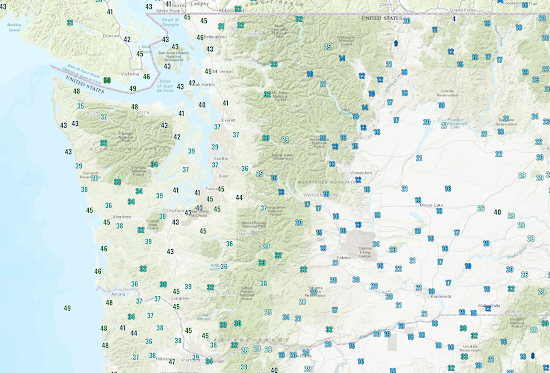 The great melt-out has begun in western Washington.

As shown below, temperatures have risen into the mid-30s to mid-40s in western Washington under the influence of moderate southerly flow in front of a cold front.  Eastern Washington remains in the deep freeze, with some locations still in the teens.

Behind the front, colder and unstable air will be moving in, arriving over western Washington this evening.  Such cool air is associated with lots of cumulus and cumulonimbus clouds, evident by the popcorn appearemce in the satellite image.
By tomorrow afternoon, the snow level will be down to 700-1000 ft, even a bit lower in heavy showers.  Do not be surprised to see some wet snowflakes tomorrow if you are near sea level.
The predicted snowfall through 4 AM Monday is pretty impressive in the mountains, with 1-2 additional feet.   Some extremely light snow (all melting) in the lowlands.

Then the cold air moves in, with the snow and freezing levels falling.   Below is the predicted snowfall for the next 24 hr.  The mountains, particularly the Olympics and the southern Cascades, get considerably more snow, with eastern Washington enjoying several more inches except for around the Tri-Cities.   A slight bit of wet snow over the lowland…..nothing will accumulate.

The big question is melting snow/ice on roadways.   By tomorrow, many of the snow and ice-bound roads in western Washington will have melted out or become passable.  Even today, travel is greatly improved around Seattle.
The next major action will be on Wednesday afternoon when a strong warm front will approach (see surface map for 4 PM Wednesday, warm front indicated by the red line).   With cool air in place, some will see light snow that evening…but don’t worry—the temperatures will zoom up with the warm front passage overnight and roads will be fine on Thursday.

To harness the North Sea winds, we must understand its complicated seabed geology