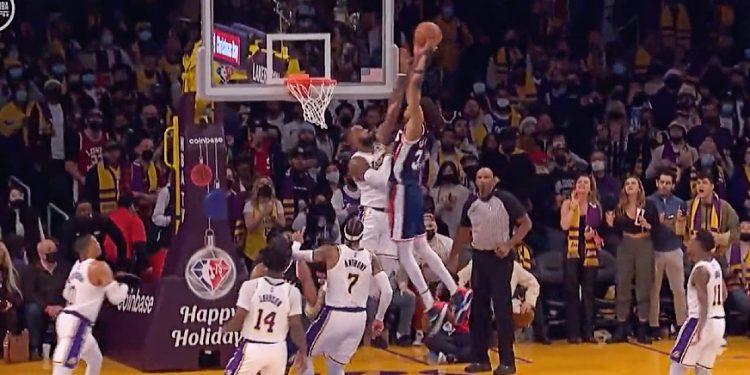 For a minute, it looked like the Brooklyn Nets were going to have a pretty terrible Christmas. The team — shorthanded due to injuries and a number of players being in the NBA’s health and safety protocols — officially blew a 23-point lead when Malik Monk made a layup with 45 seconds left in the fourth quarter of their road tilt against the Los Angeles Lakers. Thanks to Monk and a masterpiece of a fourth by LeBron James, things were tied up at 115, and all the momentum in Staples Center Crypto.com Arena was in the home team’s corner.

And then, out of a timeout, the Nets decided to put the ball in James Harden‘s hands and tell him to do something. Harden made his way into the lane, which led to Carmelo Anthony having to make a choice between sticking with Nic Claxton or throwing a body in front of Harden. He chose the latter, which freed up some space for Claxton to go up and catch a lob. He was met at the rim by James, but it did not matter, because Claxton put the future Hall of Fame inductee on a poster.

After a free throw by Claxton, L.A. dang near had a response out of Russell Westbrook on the other end of the floor, but his dunk attempt clanked off the rim.