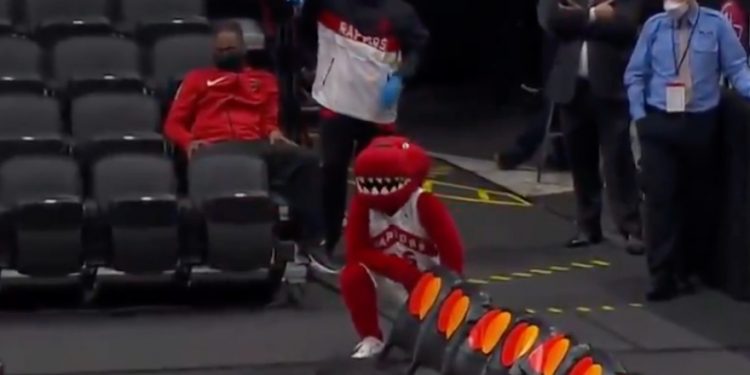 The Phoenix Suns and the Toronto Raptors played an intriguing, back-and-forth game on Tuesday evening at Scotiabank Arena. Toronto led after a strong first quarter and, after a Phoenix rally, both teams held leads in the fourth quarter in what became a 99-95 road win for Phoenix. Down the stretch, the Raptors were forced to foul the Suns to keep the game alive, with Phoenix attempting six free throws in the final 6.5 seconds. One such sequence involved Devin Booker at the line, and that is where things got particularly interesting.

Booker converted the first free throw, giving the Suns a 94-92 lead. As the ball fell through the net, however, Booker began gesturing in frustration, with the broadcast eventually revealing that he did not take kindly to the Raptors mascot distracting him behind the basket.

The Raptor lives rent free in the heads of his opponents.

As you can see, the mascot was removed by the officials from behind the basket, and Booker went on to make the second free throw. It is already a bit of a bizarre situation in Toronto with no fans in the building, but this brings thing to even a wilder level, with a mascot prompted to move in the height of crunch time for, essentially, doing its job.

Granted, Booker is within his rights to complain, and the setting is odd, but this might be a first. One might wonder if there is any rule on the books here, but in the moment, the officials stepped in and everyone got a little bit of amusement about a mascot playing a part in the proceedings.