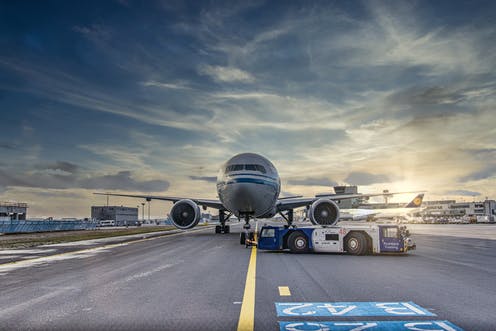 Every aeroplane contains a complex network of electrical cabling that keeps it flying smoothly. For every four passengers in a modern aircraft, you can expect about one mile of cable. That means an average passenger plane has 100 to 200 miles of wiring snaking through its structure.

Each plane offers different amenities. Some now boast electronically dimmable windows that use electricity to alter their transparency, while many flyers are used to enjoying individual video screens and even external cameras displaying the outside scenery. These all require specific cabling. And as consumer expectations increase, so will the cabling mass.

Mass is a vital measurement in aviation, since lighter craft use less fuel. Engineers are constantly finding ways to make planes as light as possible while maintaining best standards of safety and comfort, both to cut costs and support sustainability.

In my research with colleagues at Swansea’s energy safety research institute, I’ve worked on decreasing the mass of all these wires by using carbon nanomaterials instead of heavier copper alloys to make them. Carbon wires can be made from many sources – including recycled plastics. By turning these discarded plastics into useful, high-quality wires, we’re turning waste into wealth.

To make these wires, we usually chemically recycle plastic materials like black plastic: a material made of mixed recycled plastics that are dyed black to provide a uniform colour. We’ve also used waste styrofoam.

Uniquely, however, we also decided to look into using 3-D printed plastic offcuts that would otherwise be headed for the bin. These types of plastic are growing in popularity, thanks to being strong, lightweight, easily moulded and very cheap. But when mixed with other plastics, they tend to cause trouble in conventional recycling processes – meaning that they often go straight to landfill.

We discovered that by dissolving these plastics before recycling them, we were able to make more, higher quality new material. This is promising for large-scale production of electrical wiring – what’s needed in aviation.

Once we’d made our lighter wires, we wanted to understand exactly how environmentally friendly they were. To do this, we counted all the carbon dioxide molecules taken in and emitted during the plastic recycling process, and compared this carbon count to the count for making copper wires.

Interestingly, although the carbon count for our recycling process was much higher compared to that for industrial copper wire production, the overall environmental impact of the copper wire was nearly ten times worse. The latter process created toxic freshwater that led to marine damage and ozone depletion.

What’s more, when we compared the projected carbon footprint of a typical commercial aircraft (the Boeing 747-400) containing either our recycled plastic wires or copper wires, we calculated that making and using recycled wires resulted in a smaller carbon footprint over the aircraft’s lifespan.

Recycled wires would make planes lighter, reducing their fuel consumption and making them more environmentally friendly in the long run. Using these wires would decrease the emissions of each plane by 21 kilotonnes: equal to a saving of 14,574 kilotonnes of carbon dioxide for an average fleet of 694 planes.

The future of plastic

The amount of plastic we use is continuously growing, which isn’t helping already overburdened global recycling systems. One increasingly popular plastic is acrylonitrile butadiene styrene, commonly known as ABS. It’s the main plastic used in 3-D printing devices and is often used to teach engineering students how to make anything from toys to body parts to tools – on this planet or beyond.

A NASA astronaut holds a ratchet created by the 3D printer on the International Space Station. NASAMarshall/Flickr, CC BY-NC-SA

Despite these exciting applications, the downside of ABS’ prevalence is the escalating amount of waste plastic produced by the 3-D printing process. But this waste can be used to make nanomaterials usable in audio cables, speaker cables, Ethernet cables and now electrical cables.

And the list of uses for these “waste” plastics is only getting longer. From beer kegs to paving and building materials, activewear and designer fashion, the future’s looking bright for recycled plastics.

Alvin Orbaek White is a Senior Lecturer (Assistant Professor) at Swansea University and has received funding through the Sêr Cymru II Fellowship by the Welsh Government and the European Regional Development Fund (ERDF). This work was supported by funding from the Welsh Government Circular Economy Capital Fund FY 2020-21. Alvin has previously received funding from UKRI/EPSRC and InnovateUK and gained support from the KTN SME accelerator program. He patented technology dealing with nanomaterial manufacturing then founded TrimTabs Ltd to finance the patent application and manufacturing process.