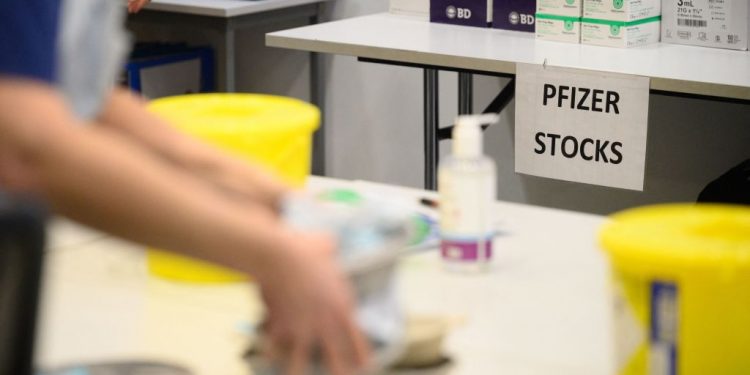 CAPE TOWN — Continuous coronavirus vaccine boosting is an unsustainable strategy, say experts, but that’s unlikely to stop wealthy countries from trying to jab their way back to normality.

In January, Israel began offering a fourth coronavirus dose to some citizens, with Chile following on Monday. Greece is set to offer a fourth jab to people with weakened immune systems after the country’s vaccination committee approved the plan on Tuesday. Germany is considering the move and the U.K. has also weighed the possibility, although its experts have voted down the idea for the time being.

While the scientific evidence doesn’t yet support continual boosting, there is another argument against the practice — it’s unlikely to halt the global pandemic.

Experts from both wealthy and poorer nations argue that regular, repeated boosters every few months don’t amount to a strategy that will work for the world, even if some nations are pressing ahead with the idea. Low coverage of first and second doses in some countries and limited supply make the strategy tenuous in light of a more fundamental issue: whether to focus less on preventing infection and more on limiting severe disease.

The emergence of the Omicron strain of the coronavirus, which was first detected in Botswana and South Africa — where vaccination coverage that is just a fraction of that in many EU countries — illustrates the mantra repeated by the WHO chief throughout the pandemic: “No one is safe until everyone is safe.”

Experts like Shabir Madhi, who is advising the South African government on vaccination, say this message still hasn’t gotten through to countries considering further boosters.

“It’s completely short-sighted,” he said of plans for fourth or more coronavirus vaccines.

“I really don’t believe that countries that are going with those additional booster doses at the mass population level have got a clear goal — unless they truly believe that they can somehow eliminate the virus and then keep their borders shut to the rest of the world to prevent importation of further variants.”

In the U.K., vaccination advisory committee chair Andrew Pollard has said it isn’t “affordable [or] sustainable” to be vaccinating everyone on the planet every four to six months. “We haven’t even managed to vaccinate everyone in Africa with one dose so we’re certainly not going to get to a point where fourth doses for everyone is manageable,” Pollard told the BBC.

While vaccine manufacturers are ramping up production capacity, the limited availability of jabs caused a goal of getting 40 percent of the world’s population vaccinated by the end of 2021 to be missed. The Independent Allocation of Vaccines Group, set up by the WHO, expects there to be enough vaccines to jab 70 percent of the world’s population with three doses by mid-2022.

However, fourth doses could throw a spanner in the works.

Even Germany has expressed fears of a vaccine shortage in 2022, with Health Minister Karl Lauterbach scrambling to secure extra doses from Moderna after warning that not enough vaccines were available for its booster campaign.

The science doesn’t support it

As justification for its fourth dose, Israel has cited interim data from a local study that it says indicates a significant boost in antibodies after a fourth BioNTech/Pfizer jab. But Richard Lessells, an infectious disease doctor at the University of KwaZulu-Natal, says that, in South Africa, continually boosting is “not going to be an effective strategy in terms of preventing infection.”

In the U.K., the government’s vaccination advisory group has said that given data indicating that just one booster continues to provide high levels of protection against severe disease, there is “no immediate need to introduce a second booster dose, or fourth jab, to the most vulnerable.”

Viral immunologist David Martinez, who was involved in the pre-clinical development of the Johnson & Johnson and Moderna vaccines. echoes this. The vaccines are “still protecting really well against severe disease, which is what the goal of the vaccines is to begin with,” he said. While it would be beneficial if the vaccines were able to curb transmission, Martinez notes that “as the virus has mutated, it becomes harder for those vaccine-elicited antibodies to curb transmission.”

As for how often boosting will be needed, “nobody has a crystal ball,” he said. “We should let the data drive those decisions and based on what we see so far, the vaccines seem to be holding up pretty well, against even Omicron.”

Whether the uncontrollable spread of Omicron and the fact that vaccines still protect against severe disease calls for a shift in approach to how the world handles the virus is the big question plaguing governments.

“What [the virus] looks to be doing is moving towards this endgame of an endemic virus, where it would become probably more like a seasonal epidemic,” said Marc Mendelson, head of the division of infectious disease and HIV medicine at Groote Schuur Hospital, University of Cape Town. Currently, the main role of boosters is increasing neutralizing antibody levels, said Mendelson, which is what reduces mild disease and transmission rather than severe disease.

Mendelson and other experts think that a second generation of vaccines would make more sense than continuing to boost using existing jabs. “If you are going to add one more dose after three, I would definitely wait for an Omicron-based one,” Ali Ellebedy, an immunologist at Washington University in St. Louis, told the New York Times.

But the more immediate question for wealthy countries attempting to suppress infection through boosters is for them to think globally rather than locally. Indeed, Mendelson said they need only look at Omicron, which likely emerged in southern Africa and has had a huge impact on the rest of the world.

“But, unfortunately, people still have their eyes more centered on their own problem than realizing that this is a global issue,” he said.

This article is part of POLITICO’s premium policy service: Pro Health Care. From drug pricing, EMA, vaccines, pharma and more, our specialized journalists keep you on top of the topics driving the health care policy agenda. Email pro@politico.eu for a complimentary trial.

Plovdiv, a city of dawdlers and loafers: Elsewhere in emerging Europe