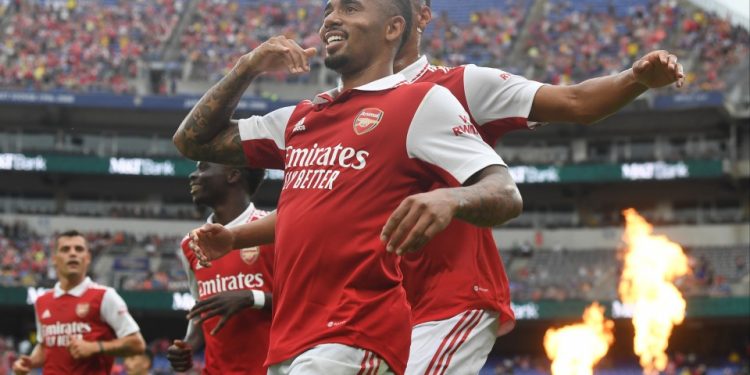 Gabby Agbonlahor believes that Arsenal still have work to do if they’re to challenge for a top four finish this term.

The Gunners have already conducted some serious business this summer after bringing in Fabio Vieira from Porto, Matt Turner from New England Revolution and Marquinhos from Sao Paulo.

Jesus has hit the ground running in pre-season for ArsenalGetty

Vieira has also signed from PortoGetty

That was followed by the blockbuster deal to sign Gabriel Jesus from Manchester City, a signing which is one of the biggest in the Premier League so far this window.

Another new deal is also moving closer with Oleksandr Zinchenko closing in on a move to the Emirates Stadium £30million, with Darren Ambrose describing the move for the Ukrainian star as ‘one of the signings of the summer’.

While their business so far has been impressive, talkSPORT host Agbonlahor believes that there’s significant work to do if the Gunners are to close the gap on the likes of Chelsea and Tottenham.

“There’s talk of Zinchenko, who I think will be a great signing, a great addition. He’s versatile, but maybe they need another right-sided winger as back up to Bukayo Saka because Nicolas Pepe has not done it.

“These teams know that they need to keep improving their squad because it’s going to get harder and harder to challenge for the top four.

“Arsenal don’t want to be cut adrift. They want to bring in top, top players because Spurs are doing the same.

“Spurs have had a great window so it’s going to be even harder this season to get that top four and Man United fans, once again, will say that I don’t think they’ve got much chance to get top four again this season.”

The new battle of Westerplatte