Thomas Partey will return to Arsenal without missing Premier League game, as Ghana are dumped out of AFCON with shocking defeat to world’s 132nd-ranked nation Comoros – who had never scored in tournament 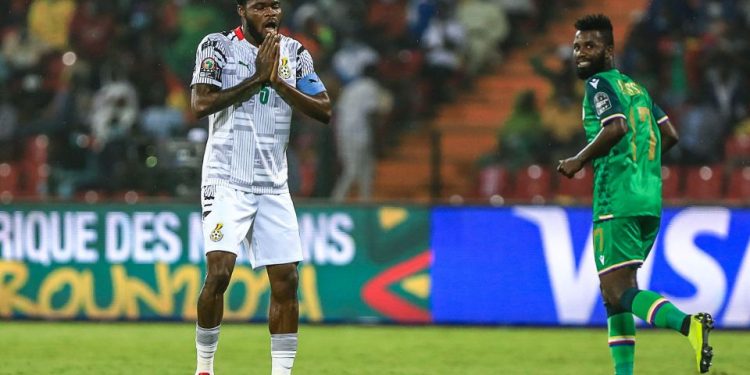 Arsenal midfielder Thomas Partey will return to his club having missed ZERO Premier League games, after Ghana suffered a shock early exit at the Africa Cup of Nations.

In one of the biggest shocks in AFCON history, Ghana were humiliated on Tuesday night in a 3-2 defeat to Comoros – the world’s 132nd-ranked nation who had never scored before in the competition.

Partey will be back in Premier League actionAFP

For reference, Ghana – nicknamed the Black Stars after the Black Star of Africa in the nation’s flag – are four-time winners and boast a host of experienced players, including Premier League stars Partey of Arsenal, Daniel Amartey of Leicester City and Crystal Palace No.9 Jordan Ayew.

Comoros is a tiny island nation off the eastern coast of Africa with a population of just under a million, and are making their AFCON debut in this year’s tournament, having only become a CAF member in 2003, and a full FIFA member in 2005.

El Fardou Ben Nabouhane, 32, of Red Star Belgrade put the minnows ahead before Ahmed Mogni, who plays in the third tier of French football, added a second in the second-half.

Ghana, who were reduced to ten men in the first-half when former Swansea and West Ham striker Andre Ayew was sent off, threatened to deny the fairytale when goals from Richmond Boakye and Alexander Djiku levelled things up.

But Mogni netted again with five minutes to go, sending the Black Stars packing after failing to win any of their Group C matches – the first time that has happened in their 22 appearances at AFCON.

Ahmed Mogni, 30, plays his club football for FC Annecy in the third tier of French footballAFP

Comoros, meanwhile, entertain slim hopes of progressing to the knockout stages as the best third-place side, behind Morocco and Gabon – who go through automatically.

The result marks a dark day in Ghana’s football history, capturing the demise of a nation who once flew the flag for Africa, reaching the 2010 World Cup quarter-finals.

However, their loss is Arsenal’s gain, as key midfielder Partey returns to the Gunners earlier than expected.

Arsenal’s recent Premier League clash with Tottenham was postponed with the Gunners short of players, particularly in midfield, which means he will go back to his club without missing a Premier League match.

Have Lithuanian scientists found a solution to chronic back pain?

Inside Clean Energy: Some EVs Now Pay for Themselves in a Year