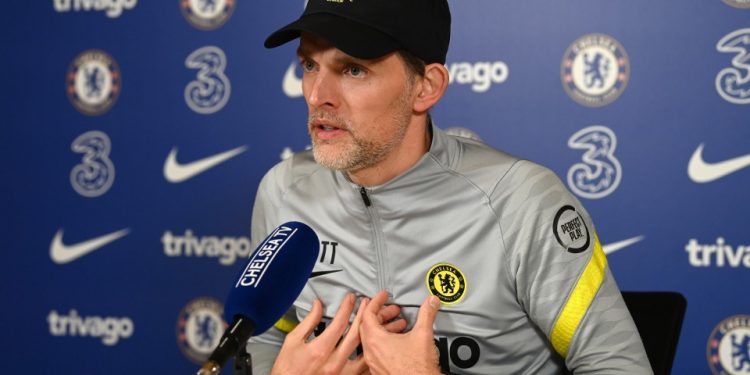 Thomas Tuchel’s plans to field a team dominated with academy stars have been dealt another blow with Lewis Baker the latest Chelsea player to test positive with COVID-19.

The Blues have a trip to their similarly patched up west London rivals Brentford in the Carabao Cup and Tuchel admits he will now have to ‘start from scratch’ after Baker became the eighth player to contract the disease.

Tuchel is enduring a tough few games as Chelsea bossGetty

“We planned now a squad and we had some plans with Lewis Baker, from the academy, and now he’s tested positive,” said Tuchel.

“So we can now start from scratch, and this is what we do right now. We’ve delayed training until late afternoon. Right now we will prepare for the match to be played.

“But even to plan training is pretty exciting because until the very last hour you don’t know how many players will arrive.

“Right now every day we do lateral flow tests and PCR tests, and only then you are allowed to be in the building.

“So this is the first lottery: you go to work and you don’t know if you can make it to your office.

“Which is good, because then it’s safe, at least for this day. And the next day you get tested again.

“But if you test so much you always find the risk of another positive. And that can really make things worse than they already are.”

Chelsea will again be without the raft of players who missed Sunday’s goalless Premier League draw at Wolves due to coronavirus isolation.

A frustrated Tuchel lamented having to rest N’Golo Kante due to his recent knee issue, with Trevoh Chalobah and Andreas Christensen further injury doubts.

Jorginho will return having tested negative for COVID after inconclusive previous results, which will ease Tuchel’s midfield options.

Chelsea were ‘deeply disappointed’ to have their request to postpone Sunday’s match at Wolves rejected, but since then the Premier League has opted not to pause the schedule.

While Tuchel understands the decision to press on, he also bemoaned having to step into a quarter-final with a severely depleted squad.

“We are fighting for every competition and I absolutely don’t like judging the importance of games because you can never tell what it does to you,” said Tuchel.

“And there’s nothing more important than winning, performing together, good performances and fighting the fights together.

“But it can happen tomorrow that we prioritise the health, not the game against Aston Villa, but the health of the players, and that we do not take any risks for some of our players.

“What we did with N’Golo Kante at Wolves was close to being irresponsible. Now will he be involved in the squad against Brentford? No, simply no.

“Would it be possible if it was the last game of the season? Yes, but we cannot do this. I will not do it. “We will now give him time to recover and prepare for the Aston Villa match.

“This is the situation. To have 13 or 14 players for one match, this is a problem but it’s not the big problem. We will fight against all odds, which is what we will do tomorrow.”

The thinking behind the merger of Poland’s energy giants? Bigger is better