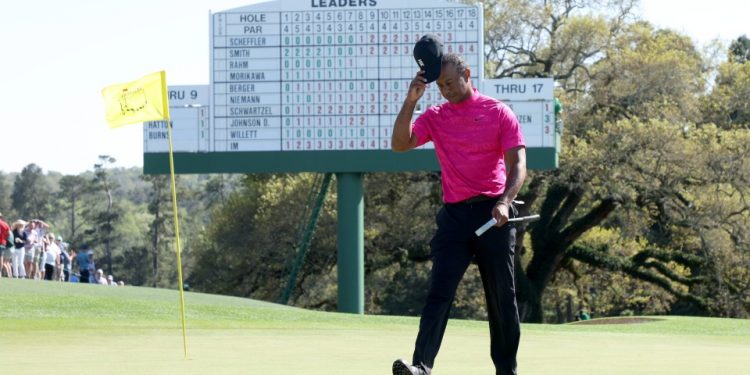 Tiger Woods hadn’t played a competitive round of golf since the 2020 Masters – and quite a bit happened since then.

But just 14 months after a car crash that authorities admitted he was lucky to survive, the legendary golfer returned at Augusta National on Thursday.

Woods tipped his hat at the end of an historic roundGetty

And, quite incredibly, he shot one-under par. Woods said he can win this week – and now everyone believes him after a logic-defying return.

As the morning session drew to a close, with a number of big names over par, struggling as the famous course showed its teeth, the everlasting 46-year-old was only three back of the lead when his round finished.

Hundreds-upon-thousands gathered to watch his opening tee shot, which missed the fairway, before his approach spun back from the green and his chip came up ten feet short.

But the first roar of many came when Woods drained the putt for par – and that club would become a feature of a resilient round.

Obvious injury-related difficulties saw him struggle from tee to green, but Woods relied on his experience – knowing where to miss – and his imperious short game to reach the sixth tee at level par.

A birdie would drop courtesy of a spectacular tee shot on six, stuffed to within tap-in range, but his limitations showed on the simple par-five eighth with a messy bogey.

The Masters 2022: UK tee times, Augusta National course changes and how to follow

Woods battled his way out of trouble several tmesGetty

Despite a number of practice rounds, Woods was yet to play 18 consecutive holes at the notoriously-hilly Augusta.

Although he appeared to be walking comfortably throughout, there were fears for his endurance on the back nine.

He took care of the 13th, nearly making eagle but settling for birdie, before another wayward tee-shot forced him to give that shot back on the following hole.

His round threatened to unravel at numerous points, but the same mental resolve that somehow got Woods to this tournament, allowed him to stay in it.

The highlight came on 16, as it so often does, when Woods holed a 25-foot putt for birdie, fist pumping like old times as the crowd went wild.

However, he would have to deal with the worst shot of the day on 18, hitting his tee shot into a different zip code.

Woods finished his round with three birdies and two bogeysGetty

The crowd were treated a special dayGetty

Nevertheless, the five-time Masters winner would save par with another clutch putt, before puffing his cheeks to mark a spectacular achievement.

The mountain is not yet climbed – Woods has always maintained getting through 72 holes is his real challenge this week.

But if they didn’t already belong to him, he has won the hearts and minds of the golfing world with a miraculous showing on Thursday.

#ESS2020 | Marius Vaščega (European Commission): In a world of ever scarcer resources, waste should be seen as a resource