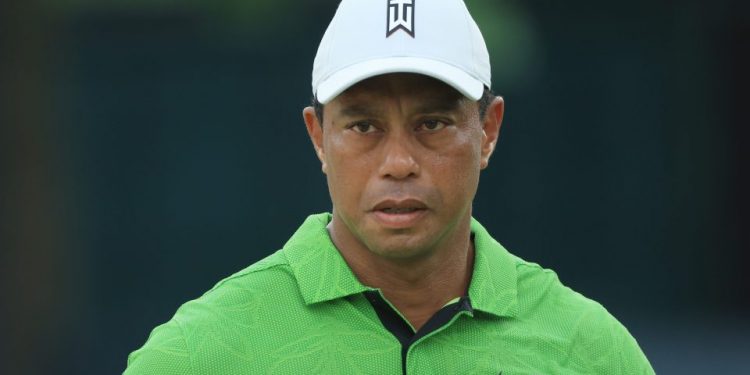 Tiger Woods has confirmed he will not compete in the US Open at Brookline next week.

The 15-time Major winner is still recovering from a near-fatal car accident in February 2021 and recently had to withdraw after the third round of the PGA Championship in May.

Woods has decided to skip the US OpenGetty

Having showed up up at the first two Majors of the year, Woods has decided to skip the third in order to give his body a better chance for the 150th Open at St Andrews in July.

“I previously informed the USGA that I will not be competing in the US Open as my body needs more time to get stronger for major championship golf,” Woods said on Twitter.

“I do hope and plan to be ready to play in Ireland at JP McManus Pro-AM and at The Open next month. I’m excited to get back out there soon!”

The 46-year-old returned to the Majors sooner than anybody expected, just 14 months on from a crash which nearly cost him his leg.

He suffered open fractures to both the tibia and fibula, along with serious foot and ankle injuries.

Despite early signs of promise at the Masters and the PGA Championship, making cuts that many of the world’s best missed, Woods faded at both tournaments as walking around Augusta and Southern Hills took its toll.

Woods is prioritising a return to St Andrews in JulyGetty

He shot his worst-ever PGA Championship round with a 79 on the Saturday, after battling to make the weekend despite clear signs of pain.

It mirrored his display at the Masters in April, when the American held his own on the opening two days, before shooting his worst-ever round at Augusta with a 78 on day three.

St Andrews, where Woods has won The Open twice, is dead flat and should prove an easier walk for the golfing legend, unlike The Country Club at Brookline, hosting next week’s US Open.

Speaking about the July event in Scotland, Woods recently admitted the Old Course is his favourite track in the world.

“I am looking forward to St Andrews,” he said in April. “That is something that is near and dear to my heart.

“I’ve won two Opens there, it’s the home of golf, it’s my favourite golf course in the world. I will be there for that one.”

Premier League betting offer: Get Arsenal to win at 40/1 OR Man City at 7/1 with 888Sport new customer special