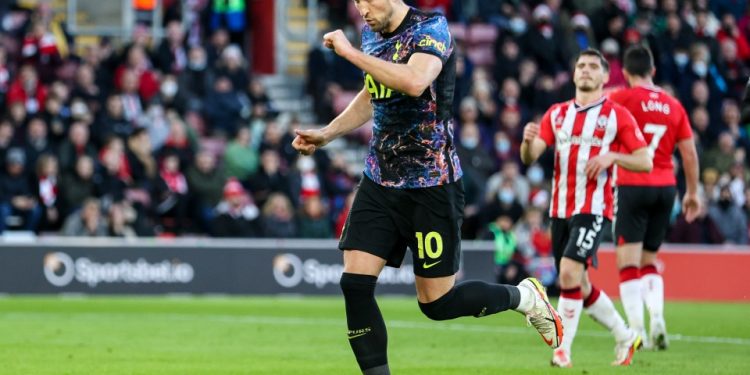 Tottenham spurned the opportunity to close the gap on fourth-placed Arsenal as ten-man Southampton resiliently held on to claim a point in a 1-1 draw at St Mary’s.

The Saints took the lead through a stunner from James Ward-Prowse, but the game switched in an instant when Mohammed Salisu was sent off for a second yellow after he clumsily brought down Heung-min Son in the area.

Ward-Prowse opened the scoring with a beautyGETTY

Nevertheless, after Harry Kane equalled from the spot, the Saints heroically clung on for more than 45 minutes as the spoils were shared on the south coast.

The hosts started off the much better of the sides and Shane Long almost gave them the opener, with his glanced header drifting wide of the bar after seven minutes.

Jan Valery fizzed an effort wide from 25 yards out minutes later after Spurs gave the ball away cheaply as Ralph Hasenhuttl’s men built on their bright start.

Ben Davies headed Son’s delivery in from a free kick after 15 minutes only for the defender to be ruled offside.

Conte will be livid with the resultGETTY

But a moment of sheer brilliance from Ward-Prowse gave the Saints the lead after 25 minutes.

A loose ball fell to the England midfielder on the edge of the area and he lashed a first-time effort into the far corner for his fifth of the campaign, leaving Hugo Lloris helpless.

Nevertheless, the game was flipped on it’s head five minutes before half-time when Salisu brought down Heung-min Son for his second booking of the game.

Kane netted the resulting spot kick for his third goal in as many Premier League matches and his fourth goal of the campaign.

The sides wet into the interval all square, but momentum solely with Conte’s men who possessed the numerical advantage.

Spurs fans will me so aggravated with the resultGETTY

And Kane thought he gave Spurs the lead shortly after the break when he beautifully finished after being played in by Harry Winks.

The England captain was, however, ruled offside after a VAR review saw him edge millimetres ahead of the last Saints defender.

Remarkably, Spurs had a third goal chalked off shortly after the hour mark with Matt Doherty adjudged to have fouled Fraser Forster before heading in.

The Irishman forced Forster into a low block minutes later when Son played him through as the hosts once again kept Spurs at bay.

Spurs continued to control possession were unable to make their dominance count, with Doherty again firing over from a superb delivery from Winks.

And substitute Armando Broja spurned the chance to win the game for Southampton late on when he raced clear on goal before his shot was blocked over the bar.

With seconds remaining, Spurs substitute Bryan Gil squandered a clear effort on goal straight at Forster to earn his side the three points.

In truth, Southampton were worthy of the point and the spoils were shared at St Mary’s.

Arsenal backed to compete with Man City, Chelsea and Liverpool for major honours if they sign ‘two or three players’ as Tony Cascarino hails ‘exciting players’ who could lead them to new era of success

The conspiracy theories made in Russia spreading faster than Covid-19