Tottenham tipped to finish in the Premier League top four this season by Jamie O’Hara, who surprisingly praises Arsenal but remains ‘unconvinced’ by Manchester United under Ralf Rangnick 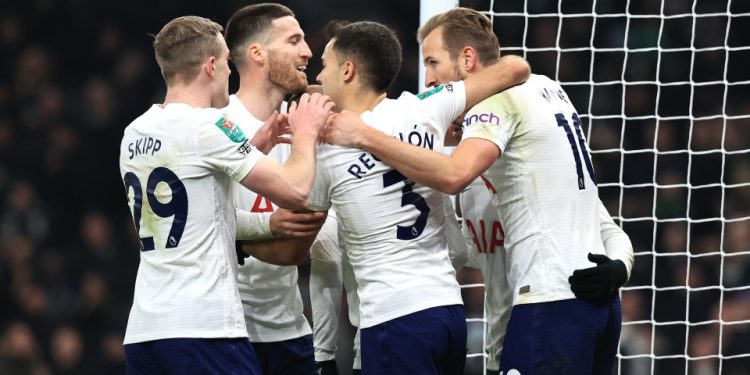 Tottenham are now favourites to finish in the top four this season, insists Jamie O’Hara, who remains ‘unconvinced’ by Manchester United under Ralf Rangnick.

With Manchester City, Liverpool and Chelsea expected to finish in the Premier League’s top three this season, it is widely accepted that there are four teams who are set to compete for the division’s final Champions League spot.

Tottenham have been tipped to finish in the top fourGETTY

Arsenal, West Ham, Tottenham and Manchester United are within four points of each other as they look to secure a top four spot come the end of the season.

And, after Antonio Conte‘s appointment as Spurs boss earlier this season, O’Hara is confident his former club now have what it takes to finish fourth.

Spurs have yet to lose in eight league games under Conte and edged out Watford on Saturday to move to within two points of fourth-placed Arsenal to two points, having played two games fewer than their north London rivals.

“People are going to call me mad and say I’ve got my Spurs hat on but I genuinely think Spurs,” O’Hara told talkSPORT when asked about who he fancies to finish in the top four this season.

“We’ve now got the manager and he’s instilled this disbelief that we’re going to go and win games, even when we’re not playing that well.

“We didn’t play that well against Watford but we got a result in the dying moments. We haven’t scored last-minute winners like that for years.

“It’s brilliant to see and I think if he gets backed in the transfer window and if Daniel Levy gives him some money and says, ‘Right, we’re not far off this, we’re nearly there, we’ve clawed our way back’, I think we can get in there.”

Arsenal have also impressed O’Hara, despite their defeat to Manchester City at the weekend.

However, the former midfielder says he’s ‘not convinced’ by Manchester United under Ralf Rangnick.

The German was appointed following the sacking of Ole Gunnar Solskjaer earlier this season and has begun to implement a gegenpressing style of play at the Red Devils.

But, after some poor performances recently, they are clearly still a work in progress, and O’Hara doesn’t think they’re ready to compete with the best sides in the division.

Rangnick hasn’t made an immediate impact at UnitedGetty

“I’m not convinced by Man United, I’ll be totally honest with you.

“I think Arsenal have been great, I think they’ve really played well. They’ve actually got this belief, they’re playing great football, and I think they deserved something from the game against Man City.

“I’m not convinced with Man United and this 4-2-2-2 system. They’ve played three really poor sides and I think when they come up against a really top side, I think they’ll get turned over.”