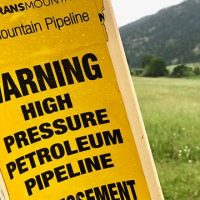 Opponents of the Trans Mountain pipeline expansion are still raising concerns about plans to redrill a complicated crossing beneath the Fraser River, after the federal Crown corporation behind the project filed a response to their statement of opposition with the Canadian Energy Regulator (CER).

Earlier this month, the CER gave Trans Mountain Pipeline a seven-day deadline to provide a “detailed response” to several statements of opposition [pdf] that raised concerns about inadequate soil testing, choice of drilling method, the need for extended casing, and the potential hazard created by an added horizontal pipe bend introduced with the shift in path.

On January 13, Trans Mountain filed an eight-page response to the CER, rejecting the need for “additional geotechnical analysis” and arguing that feasibility reports from 2015 “remain valid”.

However, Peter Vranjkovic of the Stop TMX Coalition was less than thrilled with the response. The preliminary engineering feasibility reports produced in 2015 were just that—preliminary—and engineers recommended additional investigation near the pipeline route to confirm the suitability of the crossing, he said. TMX consultants BCG Engineering called for additional test bores to study the soil structure.

Finalized versions of the BCG study, and another report by Hatch Mott McDonald, have not been filed with the CER, Vranjkovic told The Energy Mix. The Musqueam First Nation wrote to the CER and Trans Mountain in August 2018 asking for “new geotechnical studies and analysis,” the existence of which it said TMX had already disclosed, but Vranjkovic said those reports were never filed.

Coalition members are questioning Trans Mountain’s assurance that the 2015 feasibility findings are still valid, citing the tunnel drilling failure in 2021 that led to the company’s December 22, 2021 application to redrill a section of the route and shift the path by eight metres. They also remains concerned about added metal stress and potential for future leakage as a result of a 26-foot horizontal bend in the realigned pipeline route. Trans Mountain says the pipeline wall will be thicker than originally planned, but the coalition said the thicker steel won’t necessarily be more resistant to stress and urged additional research.

Trans Mountain said the original horizontal directional drilling attempt would have succeeded if not for “mechanical failure” of the drill pipe, and maintained that alternative drilling methods are either unnecessary or not feasible. The coalition is looking for engineering analysis and disclosure to the CER on the “root cause” of the tunneling failure.

The back-and-forth prompted six NDP MPs to write to the CER and Natural Resources Minister Jonathan Wilkinson asking that redrill approval be withheld “until current reports and studies have been conducted, submitted, and reviewed.”

The CER has also scheduled a hearing January 28 to consider Trans Mountain’s request to bypass sections of the City of Burnaby’s building and fire services bylaws.

The pipeline company is disputing the municipality’s requirements regarding the width of fire lanes, claiming the delays “were over trivial matters and that the city was using its permitting process to once again stall construction of the pipeline,” the Burnaby Beacon reports. “The city, however, responded late last month to note the delays have been entirely due to failures by Trans Mountain to meet the city’s requirements.”

Burnaby says its requirements, which exceed provincial building code minimums, are needed to ensure safety for such a dangerous facility. Trans Mountain claims Burnaby’s requirements aren’t feasible, and that they’re unnecessary because Trans Mountain is prepared to fight worst-case fires using its own equipment and crews.

“While municipalities are permitted to adopt more stringent requirements than the Building Code, Burnaby has not provided any reasonable explanation for why more stringent requirements are needed for safe fire response at the terminals,” Trans Mountain wrote. “Even if Burnaby were to assist with fire response at the Burnaby Terminal or WMT, which it has stated it will not, Trans Mountain’s designs will provide safe access for Burnaby Fire department vehicles, sufficient area for deployment of its largest vehicles, and safe egress.”