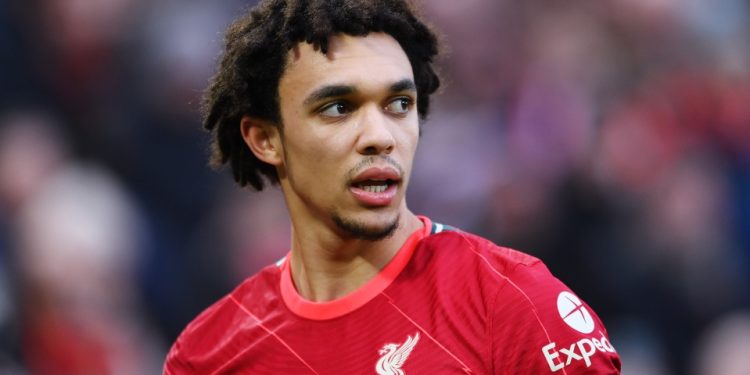 The Liverpool right-back recorded another assist as his side beat Brentford 3-0 at Anfield on Sunday.

Alexander-Arnold provided an assist for Fabinho, who opened the scoring for Liverpoolgetty

That takes his tally for the season to ten, meaning he is on course to beat the record of 13 assists by a defender in a single Premier League season.

The England international’s numbers are up there with some of the best in the world since he broke into the Liverpool team under Jurgen Klopp.

Only Thomas Muller and Lionel Messi have provided more assists than Alexander-Arnold in Europe’s top-five leagues since the start of the 2018-19 season.

42 – Since the start of the 2018-19 season, only Thomas Müller (64) and Lionel Messi (47) have provided more assists in Europe’s big-five leagues than Liverpool right back Trent Alexander-Arnold (42). Platter. pic.twitter.com/ntDC6hI6YJ

“Sometimes, during a game, you have to check yourself when you’re involved in an emotional game like this as a co-commentator or commentator,” Neville told Sky Sports.

The Reds duo are world-classGETTY

“You’re mentioning them in the same breath as probably the two greatest full-backs I’ve ever seen, Roberto Carlos and Cafu.”

He added: “They were exceptional, but these two… I don’t think I’ve seen two full-backs play in the Premier League that are as good as these two as a pair.

“The way in which they combine on the pitch, the way they play the game, they’re an absolute joy.”