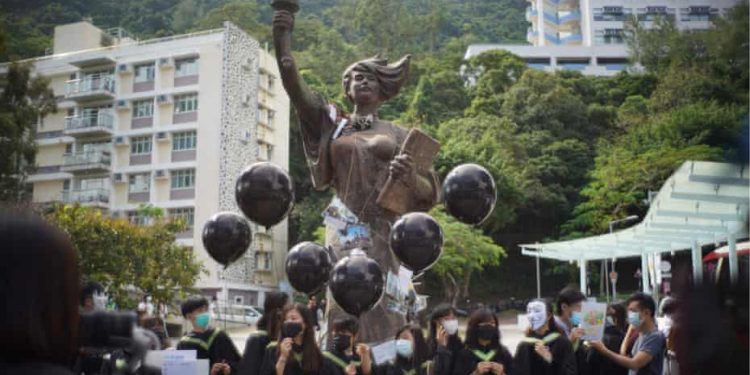 The removals come a day after Hong Kong’s oldest university took down a statue named the Pillar of Shame, commemorating the events of 1989, sparking outcry by activists and dissident artists in the city and abroad.

Hong Kong used to be the one place in China where mass remembrance of Tiananmen was still tolerated, with thousands gathering each year to mourn the hundreds of democracy protesters killed by Chinese troops in 1989.

The city’s university campuses have sustained the memory of the crackdown, with statues commemorating the events a vivid illustration of the freedoms the semi-autonomous territory enjoyed.

But early on Friday, the Chinese University of Hong Kong (CUHK) removed the Goddess of Democracy from its campus.

The sculpture by Chen Weiming – a 6.4-metre (21ft) high replica of the giant statue that students erected in Tiananmen Square – had become a potent symbol of Hong Kong’s local democracy movement. Around the same time, the Lingnan University of Hong Kong removed another relief sculpture marking the Tiananmen crackdown.

The removals took place on Christmas Eve, when most students were on break and away from campus.

CUHK said it removed the “unauthorised statue” after an internal assessment, adding that the groups responsible for moving it to the campus in 2010 were no longer functional.

Chen told Hong Kong Free Press he would be speaking to his lawyers about the removal of his work.

“It is a major regret,” he said. “I am concerned about whether the monuments are damaged and where they are placed currently. When I have more information. I will contact my lawyers in the US to see if any legal actions can be taken.”

Lingnan University said it had taken down its statue after having “reviewed and assessed items on campus that may pose legal and safety risks to the university community”.

On Thursday the removal of the Pillar of Shame was decried by dissidents and activists living overseas.

“They have used this despicable act in an attempt to erase this bloodstained chapter of history,” Wang Dan, one of the Tiananmen student leaders who was jailed after the crackdown, and now lives in the US, wrote on Facebook.

Beijing is remoulding Hong Kong in its own authoritarian image after democracy protests two years ago, and commemorating Tiananmen has become effectively illegal. An annual candlelight vigil to mark the 4 June crackdown has been banned for the last two years, with authorities citing security and pandemic fears.

There is no official death toll for the Tiananmen massacre but activists believe hundreds, possibly thousands, of people were killed.

Inside Melbourne’s Park hotel, refugees sit and wait for Covid to find them

Skanska to invest a further 52.4 million euros in Wrocław