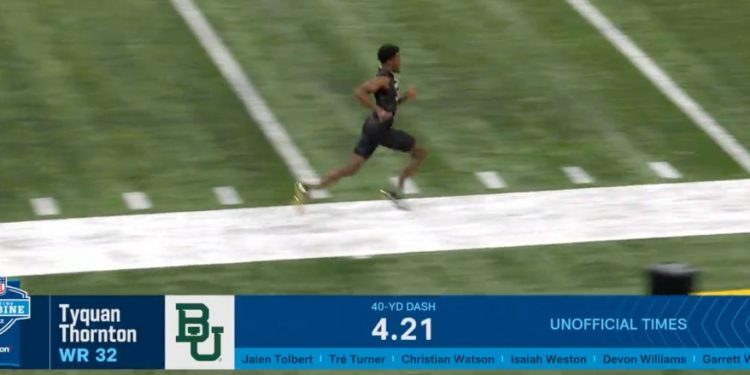 As football across all levels leans more and more on the passing game, the wide receiver group has become the marquee attraction at the NFL Combine, and 2022 was no different. A deep and talented group got to strut their stuff in Indianapolis on Thursday night and the first group put on an absolute show in the 40-yard dash, headlined by 4.31 and 4.32 runs from Velus Jones Jr. and Calvin Austin III, respectively.

They set the bar high for the second group that came later in the evening in Indy, but those times would not hold as Ohio State standout Chris Olave strolled up to the 40 line at Lucas Oil Stadium and proceeded to drop everyone in the building’s jaw with an outrageous 4.26 unofficial time.

If that time indeed holds up once the official numbers roll in — and it looked that fast if not faster — it would tie him for the fourth fastest 40-yard dash in NFL Combine history. Amazingly, he’s fourth fastest ever because he wasn’t even the fastest in his group, as Baylor’s Tyquan Thornton broke John Ross’ record with a 4.21 in his first run (again, that could change on the official number, but should be very close).

If that holds, it’s the fastest of all-time and it, like Olave, looked the part. Somehow, there was a third sub-4.3 in this group, as North Dakota State’s Christian Watson ran a 4.28 alongside them in what may go down as the fastest position group in NFL Combine history.

UPDATE: Unfortunately, it was a situation of a quick clock on the unofficial NFL Network broadcast, as Olave’s real time was, stunningly, .13 seconds slower at 4.39, while Thornton’s mark was 4.28, still blazing quick and tied for the sixth fastest in history, but not a record.

In total, nine receivers went officially sub-4.4, which is a record at the Combine, so while it wasn’t quite as outrageous a night as we initially thought, it still was a crazy fast group of receivers.

Women in 60s Soho: ‘You were less judged. You could do what you wanted’