Tyson Fury and Anthony Joshua will fight ‘at least once’, says Top Rank president, with Oleksandr Usyk and Dillian Whyte lined up too 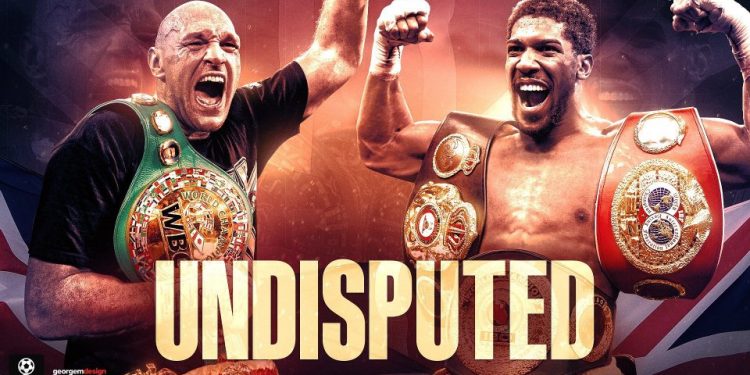 Those hoping to see Tyson Fury fight Anthony Joshua in the future have been handed a big boost by Fury’s American promotional team Top Rank.

The British battle was originally slated to take place earlier this year until Deontay Wilder went through the court of arbitration to get his trilogy fight.

The undisputed title fight would take a lot to revive

Joshua has since lost his WBA, IBF, IBO and WBO world heavyweight titles to Oleksandr Usyk and while he has a chance to win them back in early 2022, the all-British undisputed title fight is far from close with mandatories to consider.

According to the promoters, making a fight against Joshua remains a priority for them given the huge fan interest.

Whenever Joshua and Fury happens, belts or no belts, people will want to see itAFP

“Regardless of one guy getting out-boxed one night, it doesn’t matter because they each have great fanbases and personalities.

“We, as people involved, owe the people to serve what they want. I think Fury and Joshua will fight at least once, because the people want it.

“If Joshua and Usyk do the rematch and Usyk looks sensational again, then maybe the public will say, ‘We want Fury vs Usyk,’” said DuBoef.

Fury has expressed an interest in facing Usyk and if the undisputed title fight presents itself, no matter who the other champion is, the Gypsy King will be interested.

AJ was humble in defeat, made no excuses and respected his conqueror – but he’s determined to win a rematchMark Robinson/Matchroom

Joshua needs to beat Usyk to get a direct route back to that fight and everyone knows it.

“Joshua says he had an off-night. He has to establish his dominance, like he did against Andy Ruiz Jr,” said DuBoef.

“Joshua has to take his career to that elevated state again by erasing his off-night. That is important.

“Tyson is in a wonderful position. He came in as an opponent for Deontay Wilder who was down and out.

“His personality has taken over the world.”

Negotiations for Fury to fight Dillian Whyte are stalling at present and the WBC champion is exploring other options as a result.

Joshua. meanwhile, is expected to face Usyk in the first quarter of 2022.