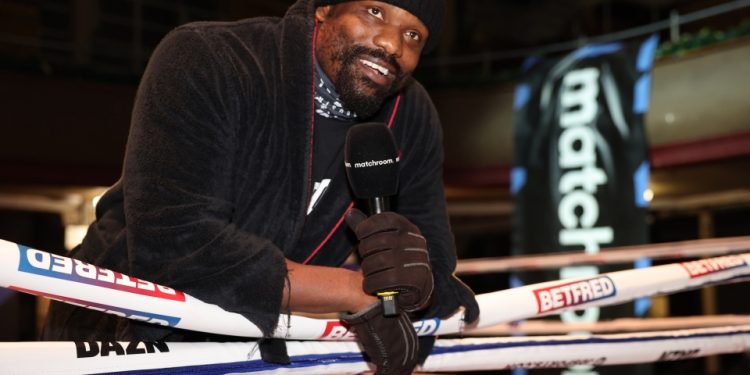 Derek Chisora has welcomed a fight with hard-hitting Deontay Wilder, despite plenty of sceptics criticising the potential match-up.

Chisora is on a three-fight skid after a loss to Oleksandr Usyk and a brace of defeats to Joseph Parker in little over 12 months.

Chisora remains as relaxed as ever, despite being linked with former heavyweight champion WilderMark Robinson/Matchroom Boxing

The 38-year-old has shared a ring with some of the very greatest fighters of his heavyweight era, including Tyson Fury, Vitali Klitschko, David Haye and Dillian Whyte.

Yet success has always eluded the north Londoner when he has made the step up to the elite level and this was never more evident than when he fought Fury for a second time in 2014.

With a potential heavyweight title fight against Wladimir Klitscho on the line, ‘The Gypsy King’ butchered Chisora for ten agonising rounds out of his less-frequented southpaw stance and at one point even asked referee Marcus MacDonnell to stop the fight and put his opponent out of his misery.

In the end, it was former trainer Don Charles who halted the action after the tenth, removing the gum shield from his fighter’s bruised and bloody mouth.

Chisora was battered by Fury in 2014, even ‘The Gypsy King’ asked him to stop

Fury continued with the one-sided beating

Despite his shortcomings at the elite level, Chisora has welcomed the chance to fight former WBC heavyweight champion Wilder as he enters the twilight years of his illustrious career.

Known for his power – he put Fury on his backside during their stunning trilogy – it would appear to be a mismatch.

“I love fighting; what most people don’t understand is some people want to have the perception of being boxers on Instagram.

“I’m not that guy. I want to be that guy that when I sit down and everybody looks at my resume, I want to say, ‘You know what, I fought everybody in my era.’

“I don’t want to let people decide for me, I decide for myself and be happy with the decision I make.

Despite this, talkSPORT’s very own Simon Jordan remains sceptical about letting such a heavy-handed fighter take on a veteran at this stage in his career.

Before facing Fury, Wilder had knocked out every man he faced, yet Jordan wonders if the effects of that trilogy fight may even turn the tide towards Chisora.

Fury and Wilder’s third fight was an instant classicGetty

“I don’t know why Deontay Wilder would want to fight Derek Chisora, but if he did, I think it would be a very difficult fight for Derek.

“Derek is strong and brave and courageous, but I’m not sure he has fought anyone who hits as hard as Deontay Wilder.

“Given the fact Deontay Wilder is slightly more mobile than some of the fighters Derek has been successful against, I think he would be challenged.

“But it depends on what Deontay Wilder you get; if he is damaged by the trilogy which has left him with nothing, no real ratings in the world, no fight to have, and if he is being forced to fight Dereck – and let’s be honest Dereck isn’t fighting for titles anymore – then you wonder what kind of Deontay Wilder you get.

“So it could be a pick ‘em fight, but if I was putting money on it, I would put it on Deontay Wilder.”

Continue the Change: What to expect from the winners of Bulgaria’s latest elections

Pushing Back Against Gentrification, One Home at a Time