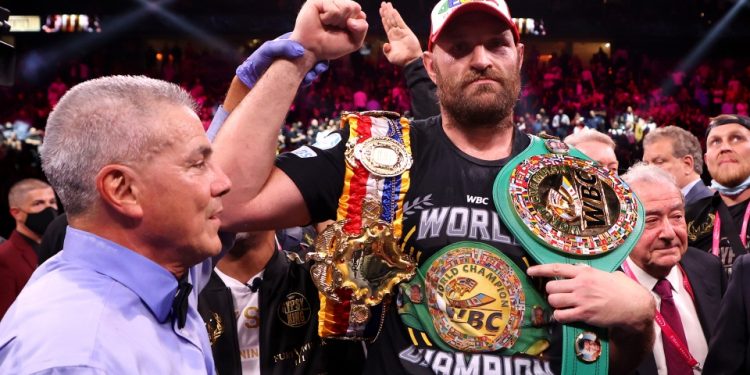 Bob Arum has revealed that Andy Ruiz Jr and Robert Helenius are the two frontrunners for Tyson Fury’s next fight, with Dillian Whyte negotiations at a standstill.

The ‘Gypsy King’ has been ordered by the WBC to defend against his fellow Brit next, however the situation is complicated.

Fury is the WBC heavyweight champion, but his next fight may not see him defend that beltGetty

Due to Whyte’s ongoing legal situation with the WBC, the fight has been ordered without purse splits set.

This means that if no deal can be done between the parties, then the fight cannot go to purse bids yet as there is a dispute over who should get what percentage of the winning bid.

Fury’s team believe their man is worthy of an 80/20 split of the purse in his favour, while Whyte’s team are campaigning for a closer 55/45 split.

The ‘Gypsy King’s’ UK co-promoter Frank Warren has said this is not set to be ruled upon until an arbitration hearing in March, and so they are now instead looking for him to fight someone else in the meantime, with the WBC title not on the line.

There have been negotiations between Fury and Whyte’s camps, but they are not close to agreeing a deal.

Arum told iFL TV: “Dillian Whyte could have that fight. We would do that fight.

“We’ve offered them a big, good deal. A purse deal far more than they’ve ever gotten in any fight, and that hasn’t moved them.

“We’ve talked to the head of the WBC – Mauricio Sulaiman.

“And he said, ‘Look, it breaks my heart, but go find another opponent, fight without the WBC title, we’re not gonna take it away from you, and go about your business.’

“Dillian Whyte really should come to the table and make the deal to fight Tyson Fury.

“But that’s not likely to happen, so they’re gonna play out the arbitration and Frank Warren and I are looking for another opponent to do Fury’s fight in Manchester or Las Vegas.

“Andy Ruiz Jr is a possibility. Robert Helenius – big, Finnish kid who can really fight. Those are the two principle guys.”

Robert Helenius (left) is on a good run of late, but was beaten by Whyte back in 2017

Arum continued by suggesting that after a fight with Ruiz Jr or Helenius, Fury could pursue the winner of the Oleksandr Usyk vs Anthony Joshua rematch and vacate the WBC belt entirely.

“Tyson is the big attraction,” he added. “Nobody has heard, in the United States, of Dillian Whyte.

“I think we’ve offered him a deal of 25 per cent with a guarantee and let him negotiate.

“But he says he wants eight-figures, over $10million, which is out of the question…

After his next fight, Fury will have his eyes on the Joshua vs Usyk winnerMark Robinson/Matchroom

“They want $10million. We want the guarantee of $5million or $5½million against the percentage and they said, ‘You’ve got to start at eight numbers, at $10million.’

“They’re just being greedy and that’s one thing that’s really bad about boxing.

“Tyson will just have to fight for the Ring Magazine title, he’ll save the [WBC] sanctioning fee money.

“Hopefully he’ll be successful, then Usyk and Joshua will have fought and the winner will be out there, and he’ll go on to fight them with or without the WBC title.

“So the loser is gonna be, without any question, Dillian Whyte.”

Blue carbon: the hidden CO2 sink that pioneers say could save the planet