UK ‘has not been quick enough’ on Ukrainian refugees, admits Ben Wallace 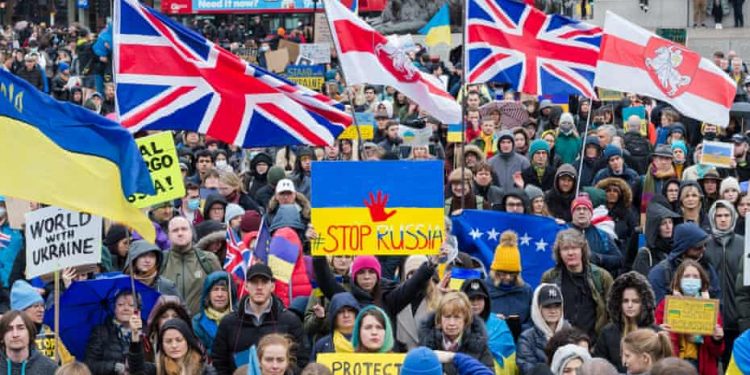 The British defence secretary, Ben Wallace, has admitted the process for bringing Ukrainian refugees to the UK has “not been quick enough” and that it has been made more difficult by sending refugees to Paris from Calais.

He said efforts by the Ukrainians had shown that Vladimir Putin would not win the war in Ukraine and that the country would be impossible to occupy. “You try occupying a country the size of France and Germany put together with 44 million people,” he told BBC Radio 4’s Today programme.

“This will be Putin’s end, this country, and so it should be, because of not only their spirit and their moral purpose on their side, the Ukrainians, but also because it will be an impossible task to occupy such a people in a country.”

Wallace expressed frustration when asked about the issues with visas, and said he was “not the home secretary” but that he had been assured that changes would be made.

The home secretary, Priti Patel, told MPs on Monday that “we have staff in Calais, we have support on the ground” but the Home Office later said that a new processing centre for visas would be set up “en route to Calais” where refugees have been turned away at the crossing, having driven across Europe.

On Monday afternoon, there were still signs telling refugees to go to centres in Paris or Brussels.

About 300 visas have been issued for Ukrainians with relatives in the UK, compared with about 1,800 in Ireland, 30,000 in Germany and half a million in Poland.

Wallace said that the MoD would give operation support to processing visas but acknowledged the process had been flawed.

“It’s difficult for those people – why wouldn’t it be? – to go all the way back to Paris,” Wallace told BBC Breakfast. “We need to upscale it, I know that the home secretary has already doubled, or trebled in some cases, more people in different processing centres. We can do more, we will do more.

“It’s not the case that we are only allowing 300 people in, it is the case that the system has not been quick enough, which is what we’re going to address.”

Wallace said that Putin had misjudged the effects the war would have on the people of Russia. “Whatever we think about President Putin, he is done. He is a spent force in the world. No one will be taking his phone calls in the long term,” Wallace said.

“So he is a spent force in the world and I don’t know whether he thinks that’s a clever thing to be, but that diminishes his own country in the world and he has to take responsibility for that.”

The Ukrainian president, Volodymyr Zelenskiy, will speak to MPs in a historic video address, the first time such an address has been facilitated in the House of Commons chamber. Wallace said he had been “privileged to meet” Zelenskiy and praised his leadership.

“He is young, he is modern, his values are what President Putin hates, and that is why President Putin is so determined to try to snuff out the values of Ukraine. Well, we are not going to let that happen.”

Greenpeace steps up legal fight against Poland’s use of coal