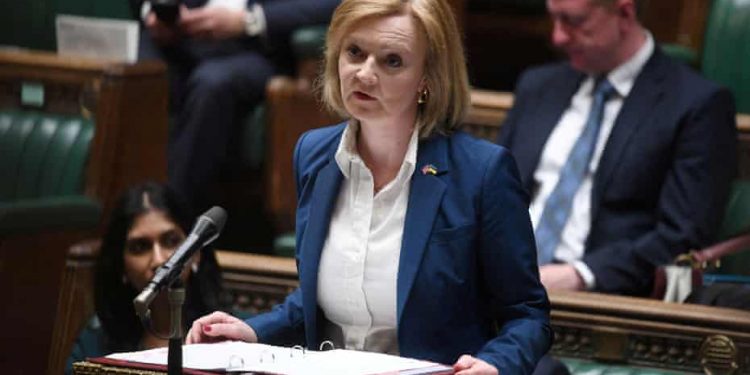 Liz Truss has been accused by the UN’s refugee chief of making “untrue” statements after claiming that critics of the UK government’s Rwandan removals policy have failed to come up with alternative policies.

Filippo Grandi, the United Nations high commissioner for refugees, said the foreign secretary was wrong because the UN had offered “many, many suggestions” instead of sending people to the east African state, which he said “violates the fundamental principles of refugees”.

The clash comes as the government prepares to send the first flight of asylum seekers to Rwanda on Tuesday. Government sources said the plane is prepared to take off with a single refugee onboard if necessary because the costs estimated at £500,000 cannot be reimbursed.

Government insiders are concerned there could be less than five people on the flight following a flurry of last-minute legal challenges. Since last week, the number of refugees due to be on the flight has fallen from 130 to seven on Tuesday morning.

Truss told Radio 4’s Today programme that critics such as leading figures in the Church of England should come up with alternative policies. “Those people need to suggest an alternative policy that will work. Our policy is completely legal, it’s completely moral,” she said.

In response, Grandi told the Guardian: “This is simply untrue because we have offered many, many suggestions to the British government on how to simplify and accelerate procedures and maintain their fairness.”

Speaking at a press conference in Barcelona, he said the UN had advised that the UK could finalise agreements with countries of transit through which refugees travel and strengthen burden-sharing between European countries. He advised the UK government to work with the EU to solve the problem.

“Cooperation is possible without resorting to this type of arrangement such as the one with Rwanda that – and I won’t repeat it anymore but we said it many times – violates the fundamental principles of refugees,” he said.

In her interview, Truss admitted there may be few people on the plane to Kigali. Asked if there could be no one on this flight, she said: “There will be people on the flight, and if they are not on this flight they will be on the next flight … I don’t have a figure. The important point is the principle.”

But a government source said the flight would take off even with just one refugee onboard because the government would not “get anything back in cost terms by cancelling the flight”, which reports have claimed could cost as much as £500,000.

Regarding the costs, a government source said: “The broken asylum system currently costs £1.5bn a year. We are spending £5m a day on hotel costs. Can people really put a price on the cost of saving human lives and securing our nations borders?”

The supreme court on Tuesday rejected an appeal bid over a judge’s refusal to block the removal of an asylum seeker due to be deported to Rwanda. Two more cases are being considered by the court before the flight takes off.

In a letter to the Times, the archbishops of Canterbury and York, as well as the other 24 bishops that sit as lords spiritual in the House of Lords, said the policy “should shame us as a nation”.

The policy has also drawn widespread condemnation from beyond the Church of England – where the archbishop of Canterbury, Justin Welby, said it “could not stand the judgment of God”. Prince Charles was reported to have privately described the plan as “appalling”.

Care4Calais, one of the charities that brought the defeated legal appeal to halt the flight, said just seven migrants expecting to be removed still had live tickets.

Clare Moseley, the head of the charity, said the government could not explain why the policy would work. “Why is our government so very determined to spend … so much taxpayer money on a brutal plan that shames us all and send refugees to Rwanda?”