US-Russia talks over Ukraine ‘useful’ but no progress made 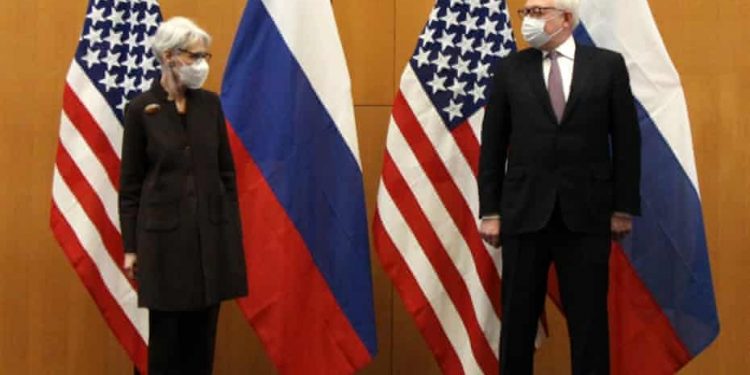 US and Russian diplomats have emerged from a day of negotiations in Geneva over the fate of Ukraine, describing the talks as “useful” and “very professional” – but also stressing they had not made progress towards resolving fundamental disagreements.

The two sides largely spend the day’s talks presenting their points of view on the situation in Ukraine, currently hemmed in by some 100,000 Russian troops, and on European security in general, and deferred further debate on them to a meeting in Brussels on Wednesday between Russia and all Nato members.

“We had useful discussion and exchanges today that will help inform our way forward,” Wendy Sherman, the deputy US secretary of state and leader of the delegation in Geneva, told reporters after the day of talks.

“We have been left with the impression that the American side approached the Russian proposals very seriously, studied them in depth,” Ryabkov said.

Sherman also remarked on the Russians’ readiness to negotiate, saying they discussed “things that are not Russian priorities”.

She said that the issues of reciprocal limits on military exercises and missile deployments were discussed, but the US ruled out as a matter of principle, the idea of a guarantee that Ukraine would never join Ukraine, restating that it was the country’s sovereign right to decide.

Ryabkov confirmed Russia had made no progress in achieving its key goals, such as securing a pledge by the US that NATO would no longer accept new members such as Ukraine or Georgia, but also said the talks were “not hopeless”.

He said that both sides were looking to the upcoming NATO-Russia Council on Wednesday as a testing ground for whether Russia can come to a new arrangement with the security alliance.

He repeated Russian denials that Moscow was planning to attack Ukraine. All Russia troops movements were taking place inside of the country’s borders, he said, and “there is no basis to worry about an escalation in connection to this”.

On being informed of his remarks, Sherman responded: “They can prove that, in fact, they have no intention [to invade] by de-escalating and returning troops to barracks.”

“If Russia walks away from the diplomatic path, it may well be quite apparent that they were never serious about pursuing diplomacy,” she said. “And I said that plainly to Deputy Foreign Minister Ryabkov -Russia as a stark choice to make.”