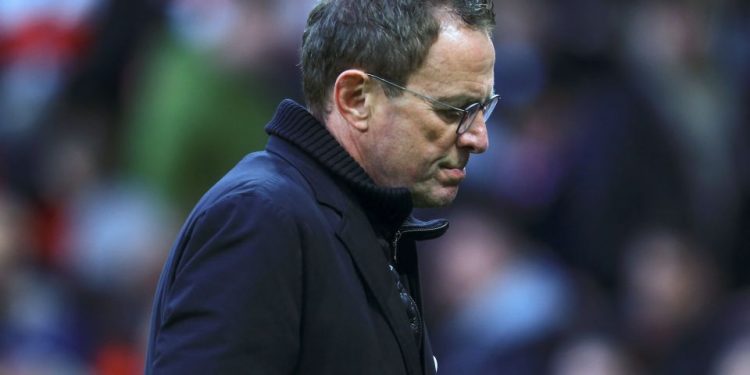 Ralf Rangnick expressed his disappointment and frustration after Manchester United’s 0-0 draw with Watford.

The hosts dominated throughout an exciting clash at Old Trafford against Roy Hodgson’s relegation threatened side but, despite producing 22 shots, could not find their way past Ben Foster in the Hornets goal.

Rangnick was a frustrated figure on the Old Trafford touchlineAFP

Whilst Rangnick’s side are now unbeaten in eight Premier League games, they will not be looking at today’s result as one point gained, but instead two points dropped.

The draw is damaging in more ways than one, as their nearest rivals for the top four, Arsenal, are now just two points behind them in fifth, with three games in hand.

Furthermore, their next three games do not make nice reading for the Red Devils who travel to fierce rivals Man City and Liverpool and have a tie against Champions League rivals Tottenham sandwiched in between.

As evidenced today and in other games in the past, it’s not the creating of opportunities that is a concern for Man United, but the taking of them having only tested Foster three times on Saturday.

It’s a real problem for Rangnick who gave his thoughts after full-time.

“One or two minutes from the final whistle I always hope we can score a late goal, as we did against West Ham for example,” the interim boss told talkSPORT.

Ronaldo and Man United were wasteful against Watford on Saturday afternoonAFP

“The only thing that we didn’t do today, that we forgot, was scoring goals. We had enough opportunities for two or three games but we were just not sharp, not clinical enough.

“This is unfortunately not the first time since I arrived and again this is why we dropped, for the third or fourth time, two valuable points.

“I would be more worried or asking myself what else we can do if we only had two or three opportunities in this game.

“But we had eight or nine, four massive chances in each half and normally that should be enough to win games.

“In the end to finish in the top four you have to win those games like today, shouldn’t drop two valuable points as I said earlier on.

“We are fully aware of that, we have difficult games to come up, now in the next two games or three games in the league the opponents don’t get any easier.”

From transition to transition. Tackling corruption in emerging Europe