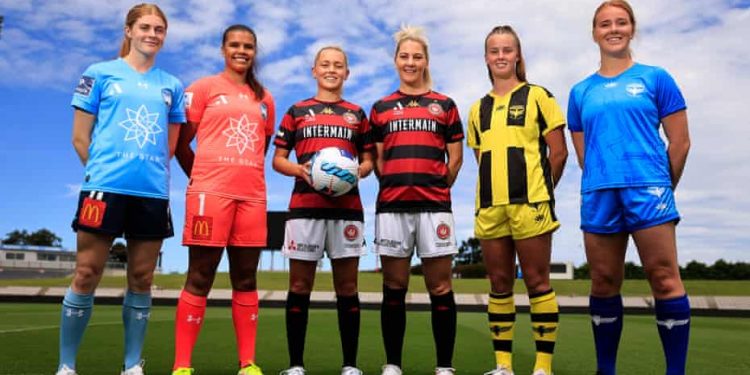 It was a case of so near and yet so far for Adelaide in 2020-21: missing out on a first-ever finals appearance in their 13-year history on goal difference to Canberra United. Nonetheless, there were positives: a record standalone ALW crowd of 5,159 achieved against Western Sydney and a bevy of young talent emerging onto the scene. These were enough to earn coach Adrian Stenta a two-year extension.

The problem when you give your local, unheralded talent a chance to shine, though, is that others begin to sit up and take notice when they perform and, football being football, pinch them off you. Dylan Holmes was lost to Swedish side BK Häcken three games out from last year’s finals and Olympian Charlotte Grant left for another Swedish side in FC Rosengård during the offseason. Maruschka Waldus, Mallory Weber, and María José Rojas are also gone.

Young and local talent remains and will be given scope – and this being ALW, don’t be surprised if we see late pre-season or even mid-season additions or returns – but the movement in the departure lounge means ending the finals drought this coming campaign is looking like a tall task.

Coach: Garrath McPherson
2020-21 finish: 2nd, semi-finals
Major ins: Hollie Palmer, Shea Connors, Ayesha Norrie
Major outs: Leticia McKenna, Tameka Yallop, Olivia Chance
Player to watch: Katrina Gorry returns to ALW after becoming a mother and, no pressure, but her building to the form that made her the 2014 AFC women’s player of the year would be huge for Roar and the Matildas
Predicted finish: 5th
Fun fact: Born in Brazil, Mariel Hecher started every game for the club in 2020-21 after a dearth of international signings due to Covid finally gave her the chance to step up from the NPLW

After the club was initially able to hold onto their core group of Matildas while the rest of the league lost theirs, Clare Polkinghorne and Emily Gielnik departed the Roar just before the finals and have since been joined by Tameka Yallop through the exit door. Standouts with international experience in Gorry and Larissa Crummer remain, but it means the Roar will inevitably be an even younger and more heavily NPLW Queensland-focused outfit this coming campaign.

Recruited to the club after his work at the head of the Sunshine’s state National Training Centre program and coach of the Queensland Academy of Sport side in NPLW QLD, new coach McPherson is highly suited to fostering this approach and, as a former underling to now-Matildas assistant coach Mel Andreatta during the club’s premiership-winning 2017-18 campaign, he knows both the club’s culture and what it takes to win.

If nothing else, Canberra should be fun to watch on the offensive side of the ball – even with Nikki Flannery’s ACL injury. Stung by the absence of Michelle Heyman in their 3-0 semi-final defeat to Sydney FC, Linton’s side has signed Allira Toby from the Harboursiders and lured 19-time Matilda Sykes back to football to give themselves a fine collection of attacking options. Heyman also returns to get the band back together with Sykes and back up a season in which she scored 10 times to seize the record for most career ALW goals off a little-heralded striker named Sam Kerr.

Changes on the defensive end, however, could spell some trouble for the side; newly arrived American defender Harran will need to step up for a group that has lost recent Matildas debutant Jessika Nash to Sydney FC.

Coach: Rado Vidošić
2020-21 finish: 3rd
Major ins: Hannah Wilkinson, Winonah Heatley, Sally James
Major outs: Noor Hoelsbrekken Eckhoff, Alex Chidiac, Chinatsu Kira
Player to watch: This shapes as the most important season of Emma Checker’s career, as the defender attempts to give Tony Gustavsson no choice but to select her for the 2023 World Cup
Predicted finish: 3rd
Fun fact: Vidošić’s son, Dario, will be joining him this year as an assistant

After losing 10 members of the starting XI which won the 2019-20 grand final, experiencing a series of near-misses in recruitment and having the players they could sign heavily affected by hotel quarantine, City thudded back down to earth last season and missed finals for just the second time.

While its Galactico (Matildaco?) sides loaded with international talent from head to toe are likely a thing of the past in women’s football’s new era, the club has recruited shrewdly this off-season to assemble a side that, although perhaps just a step behind Sydney and Victory, should reach finals. The addition of Kiwi attacker Hannah Wilkinson, in particular, addresses the club’s most pressing need and the return of Rebekkah Stott from Hodgkin’s Lymphoma adds not just a top-class defender, but also a world-class presence to the dressing room.

One small niggle, though, is that the club’s reliance on recruiting young interstate talent risks leaving them as the third option for standout Victorian youngsters when Western United enters ALW next year.

Sally James’s broken thumb on the eve of the season means 41-year-old Melissa Barbieri will start the season as the incumbent No 1.

Coach: Jeff Hopkins
2020-21 finish: 3rd, champions
Major ins: Courtney Nevin, Alana Murphy, Casey Dumont
Major outs: Gaby Garton, Lisa De Vanna, Angie Beard
Player to watch: If central defender Kayla Morrison was Australian she would already be a Matilda, and if she becomes eligible beforehand will be in green and gold in 2023.
Predicted finish: 1st, champions
Fun fact: Striker Melina Ayres may be a contender for the golden boot but she is also handy with a bat, having once been a junior Victorian representative in cricket.

Keeping around the young, predominantly Victorian core of the side that lifted the club’s second-ever championship in 2020-21, Hopkins looks primed to pad out his resume as the most successful coach in club history in the coming months. Nevin should slot in next to the returning Kayla Morrison, Claudia Bunge, and rising star Polly Doran in defence. Kyra Cooney-Cross should excel in what will almost be her last season in Australia before she moves to Europe. And American import Catherine Zimmerman, in her second year, should continue to shame us all with the sheer depth of her stamina and determination in attack. The loss of De Vanna is a big one, but her absence could potentially open the door for 22-year-old Ayres to continue to develop as a first-choice striking option and throw her into Matildas’ contention.

They are the definitive favourites, especially if they can pull off multiple planned moves for high-profile reinforcements on the eve of the season.

Possessing a strong junior set-up and a heavy emphasis on recruiting and retaining local talent, the Jets – be it down to necessity, a deliberate strategy or a combination of both – have deep, deep ties to the region. This sense of familiarity extends to this season’s squad. Wilson is back in the dugout for her second season and the likes of Tara Andrews, Claire Coelho, Hannah Brewer, Cass Davis, Lauren Allan, and 11-time Matilda Gema Simon will all run out for another go-around in the Hunter.

With another year in Wilson’s system, and the addition of internationals Markussen and Eddy, the Jets should better last season’s two wins, but finals football will still be a challenge.

A cursory glance at the record books would tell you Glory’s 2020-21 campaign was a disaster: no wins and a draw against 11 defeats and seven goals scored compared to 32 conceded. That fleeting analysis, however, would fail to communicate the extent Epakis was on a hiding to nothing. His late appointment, challenges in recruiting and Western Australia’s border situation made his task, effectively, a Sisyphean one.

Now, what the Omicron variant may mean for his side’s ability to travel or host games remains a vexing question, but it cannot be said that this Glory side does not have the former NPLW New South Wales coach’s fingerprints all over it. More than a dozen new players have signed with the club for this season, including some of the most promising and overlooked youngsters on the east coast, and Matildas great De Vanna will provide much-needed leadership and grunt.

The play-offs are a big ask but they should be good for a few surprises.

As good as Sydney were last season – they won a first premiership in a decade – it was, to paraphrase Dragon Ball Z villain Frieza, not even the group’s final form.

Already aware of the sea change occurring in women’s football as he watched his side be vanquished by Melbourne City in the 2019-20 grand final – the last before a score of Matildas left for Europe and taking place just days before Covid slammed international borders shut – Juric embarked on a multi-year project in assembling his side in the subsequent weeks and months, locking in a host of young and talented locals who would be around not just in the short term but also the years ahead.

Now, with a season under their belts, Sydney should once again be there or thereabouts, with the dynamic front three of Remy Siemsen, Princess Ibini and, in particular, Cortnee Vine ones to watch. Nonetheless, the loss of Polias and Ellie Brush, for family reasons and an ACL injury respectively, is a blow.

Grace Wisnewski, 19, will line up for expansion side Wellington. Photograph: Brendon Thorne/Getty Images for APLWellington Phoenix

Coach: Gemma Lewis
2020-21 finish: None, expansion side
Major ins: Annabelle Martin, Grace Jale, Grace Wisnewski
Major outs: None, expansion side
Player to watch: Forward Grace Wisnewski was one of New Zealand’s standout players at the 2018 U17 World Cup and now gets the chance to make history with the Phoenix’s women
Predicted finish: 10th
Fun fact: Defender Martin is the daughter of former Richmond AFL player Geoff Martin and once turned down an offer to play for the Melbourne Renegades in the WBBL

After coming agonisingly close to fielding an ALW side in 2020-21 only to be denied at the last by Football Australia, the Phoenix will make history as the 10th side in the competition – Western United and Central Coast Mariners will enter next year – and the first-ever professional women’s team in New Zealand.

Inevitably, the ‘Nix’s introduction will prove a boon for the development of the women’s game in Aotearoa but, at least in the short term, things will be pretty tough going for Lewis’s side. To start with, NZ’s border situation means the team face the prospect of playing some, if not all games in Wollongong this season and, as hinted by Lewis’s status as NZ’s U20 boss, this is going to be a very, very young group – Martin is the “veteran” at 23 with 40 league appearances. Seeing genuine improvements from the young squad and avoiding a season like the one Perth endured in 2020-21 would be a positive.

After a breakthrough 2019-20 campaign which propelled the team, on the back of strong play from their international contingent, to a maiden finals appearance, a more locally flavoured red-and-black outfit slipped to sixth last season. Now, under the guidance of Western Sydney-born Cannuli, who has stepped into the head coaching role after a long apprenticeship as an assistant, the club have what it takes to return to finals football if things click into place. If they do not, they could struggle.

The defence has lost Matilda Nevin to Melbourne Victory but retained burgeoning Wanderers great and 10-time Matilda Cooper at its heart, alongside new signings Ralston, Hunt, and Allen. The new trio all have what it takes to reinforce the backline into a strong unit but also arrive after injury-hit periods at Sydney, Canberra, and Melbourne City.

A young midfield featuring Rosie Galea, Galic, Malia Steinmetz could surprise, especially with some targeted veteran reinforcement on the eve of the season, as too could an attack led by recently capped Matilda Bryleeh Henry and talisman Erica Halloway.