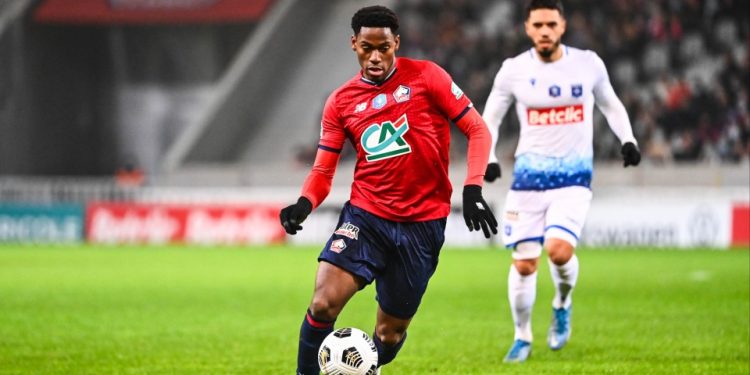 West Ham and Arsenal have been put on red alert after Jonathan David’s agent revealed the Lille star will leave the club at the end of the season.

The Canada international continues to improve game-by-game, following up a 13-goal league-winning campaign last season with 12 strikes already this term after 19 matches.

At just 21 years old, David already looks like he has potential to be one of Europe’s leading forwards and the Gunners, West Ham and Spanish giants Real Madrid are reportedly keen on a move.

David’s agent, Nick Mavromaras, has now revealed that the player will leave the Ligue 1 club at the end of the campaign and he has tipped the Premier League as a suitable destination for his client.

Speaking on Radio Canada, he said: “For us, the goal is to finish the season in Lille, but it will be his last season there for several reasons. I think the Premier League is a good option for him.

“I think that he likes Spain a lot also because he likes the feeling of the ball and the very technical players. These two leagues are a big priority for him, but nothing is excluded.”

Moyes is looking to recruit a striker in JanuaryAFP

David has 29 goals in 75 appearances since joining Lille from Gent in 2020 and he could be a handy signing for any club.

Arsenal are also looking for a replacement for axed captain Pierre-Emerick Aubameyang.

However, West Ham also need to reinforce in attack and Dean Saunders urged the club’s hierarchy to invest when the transfer window opens in January to keep their best players, such as in-demand midfielder Declan Rice.

“The owners have been chucking money at it for a while now,” Saunders said on Sports Bar on Wednesday evening. “[Manuel] Pellegrini was manager for a bit and they gave him a load of money and that didn’t work.

“Under David Moyes, they are getting back, he’s got a team together. If I was the owners I would be saying, ‘What do you need David?’

“West Ham are on the brink of the next step, I think this is the best team they have had for years. They’ve got really good players.”

Poland: the Capital of Catching up